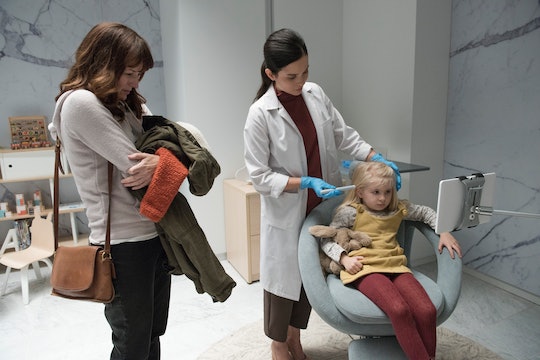 This 'Black Mirror' Episode Dives Into Every Parent's Worst Nightmare

As a parent, I probably dream up a dozen different ways my son could get hurt or be in harm’s way on any given day. But when you’re raising a kid, that’s the kind of neurotic behavior that becomes almost second nature and a new normal. The Season 4 Black Mirror episode titled "Arkangel" highlights a lot of very common parental fears, but underneath it all is every parent’s absolute worst fear that they deal with right from the beginning: the fear of losing your child. But what if, in trying to prevent that fear from coming to pass, you end up making it happen? This is what "Arkangel" explores.

I don’t know any parent who doesn't wonder at least once a day how much protection or supervision is too much or too little for your child. You want to protect them from the harsh realities of the world, but there's always the chance that your overprotection or over-censoring could come with severe consequences. Like with many Black Mirror episodes, viewers quickly learn that advanced technology can take a dark turn, and while the idea of being able to control all aspects of your child's life may sound nice at first, it's actually the very thing that can rip parent-child relationships apart.

The episode starts off like any other, with a seemingly normal everyday life, but the technology factor comes into play shortly after Marie loses sight of her toddler, Sarah, at a park. That alone is a very real fear that literally all parents deal with on a daily basis. When I take my four-year-old to the park, I rarely, if ever, take my eyes off him for fear of having the same type of incident happen to him, or worse. (My imagination can dream up terrifying kidnapping scenarios fit for Liam Neeson.) I have to put myself in check and remind myself that constantly hovering over him isn't good for either of us.

In the episode, Marie is introduced to an experimental implant called Arkangel, which acts as not only a GPS for her daughter, but also a way to see what her daughter is seeing at any given time, as well as sensor what she shouldn’t be able to see, like violence or otherwise harmful material. It also monitors her vitals.

For a small child, it’s the perfect technology to help parents keep them safe. But as with all things in Black Mirror, the technology of the Arkangel chip eventually has negative repercussions for both Marie and Sarah. As a parent myself, I can understand how Arkangel would play a useful role in my life and I would find it hard to resist the urge to use the technology to protect my son at all costs. But where do you draw the line? Can parental control ever go too far, even if you have your child's best interests at heart?

From the moment you become a parent, you start to worry that you’re hovering over your child too much or not allowing him or her to learn or explore on their own. But at the same time, you’re concerned that you aren't spending enough time with them, or doing enough to protect them from the outside world. It’s almost impossible to find that happy medium, which is something Marie learns the hard way.

I may not be grappling with the decision to watch my child’s every move through his eyes via an implanted chip in his head, but I do struggle to find the right way to watch over him and care for him, while also giving him a sense of independence.

In the Black Mirror episode, Marie uses the blocking aspect of the Arkangel implant to prevent Sarah from seeing certain things (like the sight of blood or a scary dog barking). In real life, we all want to protect our children from harsh realities or things that could scare them, but it quickly becomes obvious that shielding these things from Sarah does more harm than good. Like when she started stabbing herself with a pencil in an attempt to finally see what blood looked like.

As a result, Marie decides to turn off the tablet indefinitely and stop watching over her daughter in order to give a sense of privacy and freedom. But it doesn't last. At the slightest uncertainty of where Sarah during her teenage years, Marie turns the Arkangel system back on, causing her to accidentally witness Sarah lose her virginity. From then on, Marie once again became consumed with monitoring her daughter.

Of course, Sarah eventually found out about it (as we all knew she would), and it did not go over well. (She brutally bludgeoned her mother with the Arkangel tablet.) Ironically, that very same chip that helped Marie feel closer than ever to Sarah when she was a child has now completely driven them apart from one another. By episode's end, she's searching for her daughter, yet again. Only this time, she likely won't be able to find her since her disappearance this time was very much intentional.

Every parent wants to feel needed, especially as your child grows. But even now, as a parent of a toddler, I know that someday my son will need me so much less. As difficult as that might be to face, it’s part of growing up, raising your child, and letting them grow into their own person. With the Arkangel chip on Black Mirror, it almost prevents that natural step in life and, as evidenced by Marie interfering with Sarah’s unplanned pregnancy toward the end of the episode, it can have serious repercussions that are truly life-changing in the worst way. Marie always had the best intentions, of course, but for Sarah, these actions were unforgivable and turned their loving relationship into one of anger and resentment.

There are tons of things I fear for my son, like rejection, being bullied on the playground, being physically harmed, learning that someone close to us hurt him in an irrevocable way, and the list goes on. But learning from your mistakes is an important part of growing up — and in this case, not allowing your child to experience these life events could make you lose the very thing you're fighting so hard to protect.