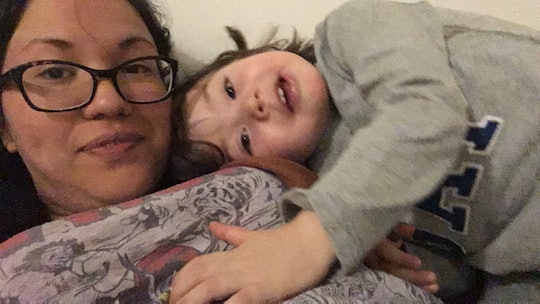 Everything That Worries A Millennial Mom

Every generation of parents have a new set of worries when it comes to their kids. If you were a parent in the '60s, you probably worried about your child being sent to Vietnam, that they might get hurt during a demonstration, or about potential nuclear threats. During the '80s, you were probably concerned about the effects of video game systems and MTV on your impressionable child’s mind. So rest assure, there are plenty of weird things all millennial moms worry about, too. Regardless of the decade, all parents have one thing in common: a constant, palpable feeling of impending doom.

Of course, the concerns of millennials differ from those of previous generations and in a number of ways. For one thing, we’ve never lived in a society that’s this technologically advanced. While our tech is wonderful and amazing and beneficial, it can also be dangerous or, at the very least, mysterious in its lasting effects. Then there are concerns that are of a more political and financial nature, both of which are often intertwined. Our environment has also never faced so many challenges, which is a concern to most parents who are hoping their children will, you know, have a healthy planet to live on.

Then again, many of the concerns we have now are just variations on the same concerns parents have always had. "Does my child stay up too late with their tablet?" translates to the more universal, "Does my child get enough sleep?" And all parents wonder about what their kid is doing at a friend’s house, or out late at night, no matter what’s happening in the world. However, if you want to get down to the specifics of millennial parenting and what us moms of today are worried about, read on.