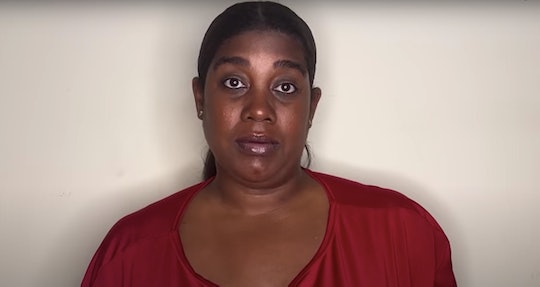 Black Moms Ask "When Did My Baby Become A Threat?" In Heartbreaking & Powerful Video

As protests denouncing racism and police brutality carry on across the country, one mother named Lauryn Whitney has posed a serious and powerful question: "When did my baby become a threat?" In an emotional and viral video, Whitney sheds light on the day-to-day fear Black mothers have to suffer as their children move through the world, grow older and more exposed to daily acts of racism.

"I dare you. Ask yourself. When did my baby become a threat to you?" Whitney — host of the Authentic Voices podcast and mom to a 3-year-old son — begins the powerful video shared on YouTube last month. As the song "Rose Petals" by Common Hymnal plays in the background, the video goes on to show a series of young Black boys asking their own questions about when they became a threat. "When I cried?" "When I started to crawl?" "When I started to dream?" "When I learned to read?" One child asks, "When I was born?"

As older boys and then men appear in the video, the questions get more specific: "When I wore a hoodie?" asks one teen. "When I drove a car?" asks another. "When you need jail cells filled?" asks one man.

"I've wept, I've wailed, I've lost count of the names. Open your eyes to the wreckage," Whitney captioned her viral YouTube video. "Your mind should be rioted by the memories of these names. Repost and share, Commit to combating anti-black racism. Do Something!"

In a recent interview with Access Hollywood, Whitney acknowledged that the video is "beautiful," like so many viewers have commented, but pointed out that it's the result of "so much pain." In the same interview with Access Hollywood, Whitney shared that cried when she found out she was having a boy because she was worried about how she was going to "protect" him. "How do I create a space that he's safe and knows not just love internally," she said, "but he feels that when he walks outside of this space, outside of his home?"

Since posting on May 29 — four days after George Floyd was killed in police custody, three months after Ahmaud Arbery was fatally shot while jogging, and weeks before Rayshard Brooks was killed by an Atlanta police officer at a Wendy's— Whitney's video has been viewed nearly 195,000 times and people across social media have thanked her for creating it. "This is so powerful and so painful. Thank you," one viewer commented on Twitter. Another described it as "beautifully tormenting"

After more Black mothers appear in the frame with the same question Whitney asked, she ends her powerful video with a message and question for all to answer: "I want to open my heart, but now I close it safe. YOU open yours, it's your turn. Hold our pain. Stop and listen. WE CAN'T BREATHE. What are you going to do?"