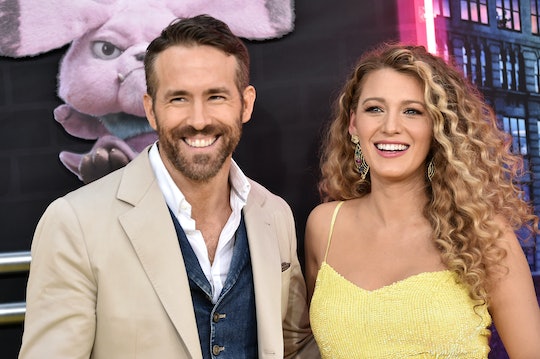 Neither Lively or Reynolds are afraid of getting candid. Reynolds is keen on sharing stories about his parenting fails on his Twitter account, and Lively is also known for telling some hilarious stories about their daughters, according to E! News. So, it only makes sense that they would not be afraid to share some moments of their real life on Instagram, too. Like on Thursday night, when Reynolds took a selfie of him and Lively out to dinner at TAK Room in New York City and posted it to his Instagram story, according to E! News. In the photo, Reynolds can be seen smiling sweetly into the camera while Lively has a piece of food in her hand.

The photo isn't the most ideal shot. Lively's hand is blurry in the picture and it looks like it was taken mid-sentence. But, this is what makes it so perfect. They look like how any other couple would on a weekday dinner out without their kids. There is nothing fancy or frilly about it, which makes it so great.

I mean, what person out there hasn't shared a photo of them to their Instagram story just happy, carefree, and in the moment?

This photo from their dinner is also a super sweet look into their weekday nights. In spite of sharing some pretty great stories about parenthood and their daughters, the couple is pretty private about everything else. After Lively announced her third pregnancy in May while posing at the premiere of Detective Pikachu, she hasn't said anything about her pregnancy since. Reynolds has been the only person to even share photos of Lively since she announced her pregnancy nearly five months ago.

And when it comes to their two daughters — James, 4, and Inez, 2 — their privacy is the most important thing to the couple. In 2015, when Lively was just a mother of one, she told Allure that she wanted to protect her daughter and have her choose whether or not to be a public figure. "It's her life," Lively said. "She should have her privacy until she chooses not to have her privacy, just as I got to choose and my husband got to choose."

In 2016, she told Marie Claire U.K. that she is intent on giving her daughters a regular and normal life. "...we want her to have a childhood like we had," she said. "So we really can't throw her into the lion's den that is LA, not that we really want to."

Since the couple wants to give their kids a very normal life, it makes sense that they would want to have somewhat of a normal life of their own — even if they are huge celebrities. Their super cute selfie from their night out is only an example of this.