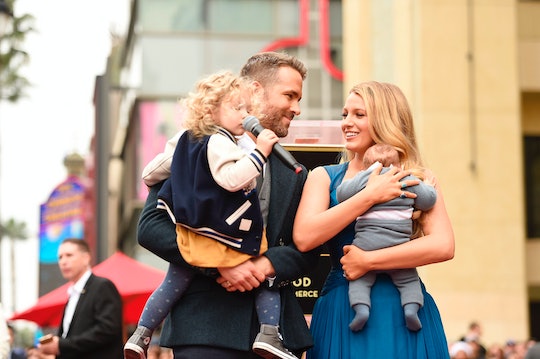 In just a matter of months, Blake Lively and Ryan Reynolds will officially become parents to three adorable kiddos. Though they've pretty quiet surrounding the details of their upcoming bundle of joy — they haven't shared a due date, the sex of the baby, or what names they're considering — looking to the names of Blake Lively and Ryan Reynolds' kids now might provide some hints or insight into what the couple may name their family's newest and undoubtedly adorable addition.

Lively and Reynolds already have two daughters together, and both of them have pretty and unique names. Their 2-year-old's daughter name is Inez, while their 4-year-old's name is James, so if they're considering something like their names, it's possibly they're looking at short monikers in the baby name books that are also packed with meaning and symbolism.

As for 4-year-old James — who was born on Dec. 16, 2014, according to Us Weekly — her unisex name comes from Hebrew origin and means "supplanter," according to NameBerry. As for why Reynolds and Lively named their daughter James, though, the name's historical, biblical significance doesn't seem to have been a big factor for them. Rather, they were inspired by a family. In an interview with Mr. Porter in 2018, the father of two revealed that the name James was his father's, who passed away in 2015.

"It felt right," Reynolds told Mr. Porter last year. "All family relationships come with some complications. For better or worse, all roads lead to here. At the end of the day, it’s easier to focus on the good stuff than the bad. My father died soon after my daughter was born, but he got to see her, which makes me happy."

As for their youngest daughter, Lively and Reynolds chose the name Inez, which is indeed spelled with a "z" and not an "s," as Lively confirmed to People in May 2018. "I had a new baby, Inez, with a ‘z’ even though everyone says it’s with an 's,'" the mom of two told People last year, adding: "I don’t know why, please tell Wikipedia."

The meaning behind the name Inez, according to NameBerry, is "pure" or "virginal," and is of Portuguese origin. While neither Lively nor Reynolds have shed much light on why they chose this pretty name for their baby girl — who was born on Sept. 30, 2016, according to Vanity Fair — it's certainly a beautiful name and resembles her big sister's name, somewhat, in length, though it does have one more syllable. According a PronounceNames.com, the name Inez is pronounced "ee-nehz," with two syllables.

Whatever Reynolds and Lively end up naming their third child, it's surely going to be beautiful and special. And if they're keeping within a pattern of four to five letter names, it's possible Inez and James' new sibling could have a short moniker, too. The world just have to wait until Lively's due date finally arrives and the proud parents formally introduce their family's new addition.