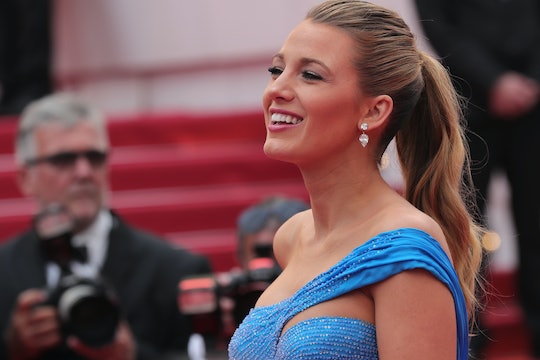 Parents want to be able to protect their kids from anything, no matter what — but sometimes that requires more than constant vigilance and dedication to those little ones. One actress and relatively new mother of two knows that and decided to take by action completing a class to learn CPR for babies and toddlers. And in an ensuing social media post, Blake Lively encouraged parents to learn CPR, because it could be life-saving. And luckily for moms, dad, grandparents, babysitters, and anyone else who's responsible for babies' wellbeing, this is absolutely a case of "Stars — They're Just Like Us," because CPR classes are widely accessible and require just a small time investment, but could truly make all the difference in the world.

You may know her best from her starring roles in The Sisterhood of the Traveling Pants film series or the hit CW drama Gossip Girl, but ever-glamorous Lively is also the mother of two young daughters. And she obviously had 2-year-old James and 9-month-old Ines in mind when she snapped a selfie of herself kneeling beside a bunch of CPR dummies, two of which were infant- and toddler-sized. And she had an important message for other parents of kids around the same age to accompany the Instagram picture.

"ALL MAMAS AND DADDIES OUT THERE--" Lively began the caption, and continued:

I can't recommend this enough, I took a CPR class with with a focus on babies and toddlers. Google "infant CPR class near me" and you'll see lots of listings. For those of you who haven't done it, you will love it. It's so helpful by giving you knowledge, tools, and some peace of mind.❤️👶👶🏻👶🏼👶🏽👶🏾👶🏿❤️🏥

She even wrapped up the post with a baby emoji in every shade, making her message very clear: All babies should have guardians who can save them in an emergency. And it's not just Lively who thinks this: According to KidsHealth.org, all parents should learn CPR, which is a process of chest compressions and rescue breaths to ensure that oxygen-rich blood flows to the recipient's brain if they've suffered cardiac arrest, and to ultimately to restart independent breathing. Going without oxygen for just eight minutes could result in permanent brain damage or death.

While sudden cardiac arrest is generally the reason that adults require CPR, that's not generally the case for infants and children, according to EMC CPR & Safety Training, LLC. Instead, scary factors like suffocating, choking, near drowning, poisoning, head trauma, and more could cause their breathing and hearts to stop. Just as Lively said, being prepared for that possibility can bring parents great peace of mind.

And it could make a huge difference: According to the American Heart Association, 70 percent of all cardiac arrest incidents happen inside a home if not in a hospital, and a whopping 90 percent of those who experience cardiac arrest outside of a hospital die. Perhaps that number would be smaller if more than 46 percent of people who "experience an out-of-hospital cardiac arrest" could get immediate help before the professionals show up.

Also, it's crucial for parents of young children to learn the difference between CPR for adults and CPR for babies or small children. For example, the depth of the chest compression should be about two inches on an adult, but more like one and a half for a child and as little as one inch for a baby, according to Indigo Medical Training. Additionally, it could be dangerous to tilt a child or baby's head back too far when administering the rescue breaths. So, taking the class is essential to learning all the intricacies and nuances.

Lively is absolutely right: Googling "infant CPR classes near me" likely will turn up plenty of results no matter where you live. KidsHealth.org suggests physically attending a class (rather than learning from a book or online) through a local hospital, the American Heart Association, or the American Red Cross and repeating the course every two years to keep your skills fresh. Check out this Red Cross link to easily find the class your looking for and gain the knowledge you need to save a life.