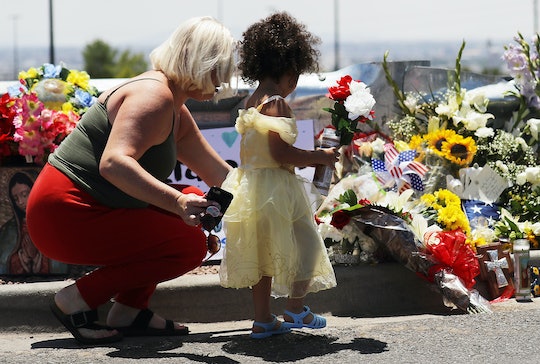 When You Blame Gun Violence On "Mental Health," You're Hurting Moms Like Me

My 5-year-old son will attend kindergarten in a month, and I can barely breathe. Five days a week, six hours a day, he'll be in the care of someone else; someone underpaid, overworked, and if necessary tasked with putting their body between my child and a bullet.

I have to find a way to send my child out into a world riddled with gun violence, then live with the knowledge that as a working mom struggling with her mental health, people like me are being blamed for that violence by the very politicians who have the power, but are refusing, to do anything about it.

"Mental illness and hatred pull the trigger, not the gun," President Donald Trump said Monday morning, reading methodically from a teleprompter in response to the two mass shootings that occurred in the span of 24 hours, one in El Paso, Texas and the other in Dayton, Ohio, where a total of 31 people were murdered and more than 50 were injured. Trump also blamed "the perils of the internet and social media," ignoring how he has used both to condemn large swaths of Black, brown, and immigrant people, and halfheartedly condemned racism, bigotry, and white supremacy, though his rhetoric has been a dog whistle — and at times an outright rallying cry — for all three.

I'm what many would consider to be a 'sick person.' I have 'mental health issues.' I'm a mom of two diagnosed with postpartum depression, anxiety, post-traumatic stress disorder (PTSD), and an eating disorder.

Trump isn't the only Republican lawmaker to blame mental health for the epidemic of gun violence. Greg Abbot, the Republican Governor of Texas, said, "Bottom line is, mental health is a large contributor to any type of violence or shooting violence." Sen. Rob Portman (R-OH), said the response to the shooting in Dayton needed to include "mental health supports." And acting White House Chief of Staff Mick Mulvaney told ABC’s This Week that the El Paso shooter and others are “sick, sick people."

But I'm what many would consider to be a "sick person." I have "mental health issues." I'm a mom of two diagnosed with postpartum depression, anxiety, post-traumatic stress disorder (PTSD), and an eating disorder.

When the so-called "party of family values" blames mental illness for a specific type of violence that every other developed nation has been able to quell, they're not only failing to adequately address and combat the real problems — easy access to guns, toxic masculinity, and white nationalism — they're pointing the finger at this nation's caregivers.

Approximately 68% of women and 54% of men with mental health issues are parents, according to the Mental Health Foundation. The very people who are afraid to send their children to school for fear they’ll be shot and killed are being used as America’s scapegoat, including the 1 in 7 moms who will experience postpartum depression and anxiety, and the 1 in 11 moms who experience postpartum PTSD.

“Connecting mental health illness to violence adds to the stigma and fear new mothers experience that they are ‘bad mothers’ and decreases their likelihood of getting the help that they need," Dr. Lauren Sosenko, Psy.D., clinical psychologist specializing in maternal mental health, tells Romper.

If mental health was truly the root cause of gun violence, then a large majority of shooters in this country would be sleep-deprived, depressed moms, firing off an AK-47-style weapon with a crying baby strapped to their chests. But they aren't. The majority of mass shooters are white males, have a history of violence against women, are devout white supremacists, and are often radicalized by racist, misogynistic rhetoric: the same rhetoric espoused by the man occupying the highest office in the land.

Sosenko say that "there is little to no evidence to support the fact that mothers with postpartum depression are any more violent than mothers who don't experience a perinatal mental illness."

Instead, moms are simply trying to face our daily challenges head on, and in spite of a prevailing mental health stigma that’s reinforced every time a mass shooting occurs and our lawmakers pass the proverbial buck. Stigma is still a major reason why people don’t seek treatment. Researchers believe more than half of women with postpartum mood disorders go undetected and undiagnosed, because they’re afraid to discuss their feelings with their spouses, family members, and health care providers. Others are afraid that if they discuss their mental health, their children will be taken away from them.

"There are so many different struggles people have, and most are managed with therapy, medication, and learning skills to manage distress," Dr. Venus Mahmoodi, Ph.D., a psychologist specializing in reproductive mental health at the Seleni Institute, tells Romper. Mahmoodi says when the narrative of mental illness causing gun violence is "kept going by powerful politicians, it can be difficult to create funding and programing" that ensures people have access to those vital support systems and treatments.

Those blaming gun violence on the mentally ill want people to conjure up a very specific picture of a so-called "mentally ill" person. Someone dangerous. Someone isolated. Someone violent. But the majority of people diagnosed with a mental illness look like me: struggling to get out of bed every morning, paralyzed by a fear that is rarely rationale but nevertheless debilitating, searching for a care provider who'll accept their insurance and see them between school drop-off and pick-up. Someone behind on the dishes because something so simple feels so overwhelming, riddled with guilt that they're ordering delivery for a fourth night in a row and their child hasn't touched a vegetable in at least a week.

We're making it to drop off on time. We're reading that third book. We're scheduling well-visits. We're also dealing with anxiety, depression, PTSD, OCD, bi-polar disorder, and trauma. We're leading board meetings and attending rallies and making it to 9 a.m. t-ball practice, and we're managing our mental health as best we can and in spite living in a country that serves only to demonize us. Because we're parents. We're moms. The same type of moms who would use their bodies to shield their 2-month-old babies from the bullets shot by white domestic terrorists. The same type of moms storming Washington, D.C., demanding their elected officials pass common sense gun laws.

We're testifying in before Congress, like Taraji P. Henson, who in June gave an emotional plea before the Congressional Black Caucus' Emergency Taskforce on Black Youth Suicide and Mental Health on the need for better mental health services in Black communities. Or we're simply keeping our children clothed and fed, ignoring the whispers of a society that tells us what we do for our children isn't good enough. We're running for office after our children have died as a result of gun violence, like Rep. Lucy McBath, a congresswoman from Georgia, who defeated a Republican incumbent after her son, Jordan Davis, a Black teen, was shot and killed by a white man who said "his music was too loud. Or we're asking someone to come watch our energetic toddler for a few hours, because the overwhelm has simply taken over and we know what's best for our child is to be entertained by a babysitter while mom rests.

With our children in tow, and our mental health diagnoses fodder for public scrutiny, moms and those who have been diagnosed with a mental illness can be found doing the work necessary to make the world safer, not more dangerous, whether it's marching for change, simply providing for our families, or checking ourselves into treatment programs and relying on our individual villages so we can focus solely on ourselves, our recovery, and our health.

"Often, women in this country do all of the unpaid labor. We are doing the unglamorous heavy lifting of grassroots activism," Shannon Watts, founder of Moms Demand Action, tells Romper via phone. Watts says 2,000 volunteers from Moms Demand Action and Students Demand Action were attending their annual Gun Sense University, a training for volunteers to be gun safety advocates, when the shootings occurred.

We are daughters and sons, sisters and brothers, and mothers and fathers living for our children and afraid to take them into a Walmart to buy school supplies.

Only in America are the people being blamed for the epidemic of gun violence the same people buying bullet-proof backpacks for their children and sitting in pained silence as those children describe their latest school shooting drill. Only in America are our children surviving one mass shooting just to die in another, like Susan Schmidt-Orfanos, whose son, Telemachus, survived Las Vegas in 2017, only to be shot and killed in Thousand Oaks, California.

Only in America are parents being told the death of their 6- and 7-year-olds was nothing but a conspiracy theory, while simultaneously trying to overcome a mental health stigma that’s being solidified and perpetuated by the president of the United States and his Republican cohorts. Only in America do parents have to hear, again, that mental illness is the root cause of the gun violence, even though we live in a country where there are more guns than people.

“As a mental health professional, it saddens me that people are traumatized in this awful way, not just the victims and witnesses but the people watching the news and just trying to get through their days,” Mahmoodi says. “I work with people with severe anxiety who are afraid of going to work. These shootings increase mental health issues in these people.”

We don’t have to live like this. There are solutions. According to 130 studies in 10 countries, laws restricting the purchase of and access to guns are associated with lower rates of gun-related deaths, including intimate partner homicides and accidental deaths in children. Ninety percent of Americans support background checks for all gun sales, and 69% believe gun laws should be stricter than they are now. States with stricter gun laws have fewer firearm deaths, and I promise that people with mental health issues live in those states, too.

"The data is in," Watts says. "It's up to lawmakers to act. They can't say that they don't know what causes gun violence. They do."

The 1 in 5 Americans who experience a mental health issue annually are not a soapbox for this president and other lawmakers can stand on. We are not a monolithic curtain they can hide behind. We are not people to be feared, or a scourge on society, or a problem that needs eradication.

We are kind and loving and would do anything for the people we love. We are daughters and sons, sisters and brothers, and mothers and fathers living for our children and afraid to take them into a Walmart to buy school supplies. We need support and understanding, resources and services. And we need our lawmakers to act.

What can you do? Text the word CHECKS to 64433 to be connected to your senator. Tell them you want them to come back from recess to pass a background check on every gun sale and a red flag law. Text ACT to 64433 and join a chapter of Moms Demand Action. Go to gunsensevoter.org, understand where your candidates and your lawmakers stand on the issue of gun safety.

More Like This
Jacinda Ardern No Longer Has “Enough In The Tank” & Moms Know Exactly What She Means
I Took Drinking Out Of My Bedtime Ritual & Unfortunately, It's Great
New Research Finds Parents’ Mental Health Improved During The Expanded Child Tax Credit
Marie Kondo Gives Up Tidying Post-Kids, Sparking Joy For Moms Everywhere
What Parents Are Talking About — Delivered Straight To Your Inbox