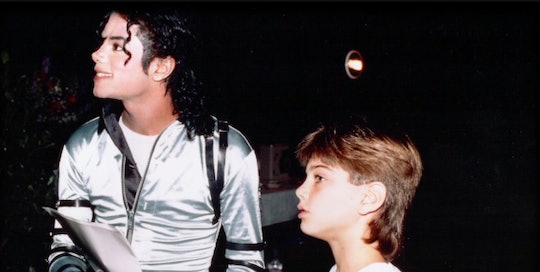 The Dangerous Parental Fantasy At The Heart Of ‘Leaving Neverland’

Watching Leaving Neverland, the HBO documentary detailing the abuse James Safechuck, 40, and Wade Robson, 36, allege they endured at the hands of Michael Jackson, left me feeling seasick, every excruciating detail bottoming out my stomach. But it was the moment when Joy Robson, Wade's mother, looked straight at the camera and said of her son's alleged abuser, "He just came across as a loving, caring, kind soul. So it was easy to believe he was just that," that left me wanting to jump ship entirely.

Throughout part one of the documentary, two of the alleged victims' mothers, Robson and Stephanie Safechuck, detail how exciting it was to befriend a celebrity like Jackson: the gifts he gave them; the trips he bought them; the suites he booked; the drivers he sent. Their enthralling stories of the magical world Jackson created are juxtaposed with painful accounts of their children's alleged abuse, and throughout the documentary I blame the parents.

And then I tell myself the lie every parent must tell themselves when hearing a story like Michael Jackson's alleged abuse of two children: "That could never happen to me or my child."

But it could, and that's a reality every parent must feel comfortable acknowledging if we're going to collectively work to end the epidemic of child sexual abuse. To blame these parents is to give into instinct — these parents failed their kids but not us. To give their stories a second look, and understand why this could have happened to them, how this could happen to us, is to defeat an instinct that actually helps abusers to get away with their crimes.

Michael Jackson's estate has denied the validity of the documentary and calls the allegations "false."

"We feel more comfortable talking about 'stranger danger' because it’s not as emotionally, spiritually, psychologically threatening as believing that someone I trust and who I like and who appears to be a good person could actually harm my child," Amy Pumo, Licensed Clinical Social Worker (LCSW) and Director of Clinical Services at The New York Society for the Prevention of Cruelty to Children, tells Romper by phone.

"It’s safer, emotionally, to believe in stranger danger, because then you feel like you have more control to prevent [sexual abuse]."

Your average parent doesn’t know a lot about the problem of sexual abuse.

And since one in five girls and one in 20 boys is a victim of child sexual abuse, according to the National Center for Victims of Crime, there are millions of parents across the country who are facing scenarios they undoubtably, at one point or another, swore they would never have to face.

So, how is it possible that a loving parent could end up befriending a person capable of abusing their child? "First, your average parent doesn’t know a lot about the problem of sexual abuse," Pumo says. "It’s something in society that is still stigmatized and shameful to talk about. So I think it’s not on parents’ radars to begin with. And if you’re a healthy adult you’d find the idea of sexually abusing a young child unfathomable. So, for many parents, it won’t even occur as a possibility."

Viewers see numerous examples of this parental blindspot in Leaving Neverland, especially as both mothers detail the early days of their interactions with Jackson. In one clip, Safechuck recounts an evening at Neverland Ranch, when she tries to see her son and Jackson, but the door to the room they were occupying was locked.

"[Jackson] came down and unlocked it and did make some excuse. He didn’t mean to lock the door. He didn’t know the door was locked. That’s what he told me," she says. "He was in there with Jimmy. They were in the bed. They were clothed... still didn’t think anything.”

That's why it's important to ask questions, and push past any fear of being perceived as the so-called over-protective parent. “The other thing that we know [about] people who victimize children is they are looking for the ones whose parents don’t ask questions or don’t check in or preplan,” Eliza Harrell, director of education, outreach, training and prevention for The National Center for Missing and Exploited Children, told Romper in a 2017 interview.

"Just asking questions about what’s happening in your child’s life when you’re not with them is an important way to prevent or detect if something is happening early on that’s happening that shouldn’t be," Pumo says.

Abusers groom the parents as they do their victims, often simultaneously. In an interview with Good Morning America's Gayle King, Jimmy Safechuck says that his mother was also a target: "Michael spends a lot of time talking to the parents and connecting with them and building relationships with them. He pays attention to them and they’re groomed over time. It’s their job to protect us and they didn’t, but I try to look at it from their point of view without letting them off the hook, because obviously that’s their job. But they were groomed as well.”

According to the documentary, Jackson spent hours on the phone with both Safechuck and Robson's mothers, building relationships with the parents separate from those he was cultivating with their children. "I felt like he and I had a relationship outside of his relationship with Wade," Robson says. "I felt like we had something quite separate, like a brother or a really close friend. He would get really lonely and we'd talk about that."

According to Pumo, this is a well-established tactic of child abusers. "They’ll look for a vulnerability in the parent," she says. "Whether it’s financial or even time."

Pumo says something as simple as offering intellectual stimulation or conversation can, over time, work to groom a parent to feel more comfortable allowing their child to spend time alone with another person that, deep down, has nefarious intentions. "The trust is built, the advantages to the family are well established, and then the abuser starts requesting more and more time alone with the child and then the parent will trust that the child is safe."

Of course, Jackson also offered these families financial benefits, both in the short- and long-term. "Abusers are very skilled at offering and filling needs that children and families have; normal needs that any family might have," Pumo says.

Most abusers cannot offer a family the monetary gains or proximity to fame that Jackson had at his disposal, but to believe that any parent isn't susceptible to manipulation is to overlook how exhausted and under-supported parents living in a country without paid mandatory family leave and high child care costs truly are. We cannot watch our kids every second of the day, so we have to trust our friends, our family, our communities. And if we’re all keenly aware of threats to our community, we can protect our kids.

Parents aren't defenseless against abusers who target children, of course, and as with any other part of parenting early prevention and education, on behalf of the parent and the child, is key.

"It’s really incumbent upon parents to educate themselves to get over their own issues addressing [sexual abuse]," Pumo says. "I think we also have to pair it with conversations about healthy sex and that sex is not the same as sexual abuse; that consensual sex is fun and pleasurable for adults and something to look forward to. We just have to have those conversations in our homes so it’s not a taboo subject and children understand the differences and also feel like they have the language to talk about whatever they feel confused by."

Every school now has lock down procedures and sheltering procedures: how many schools have sexual-abuse prevention?

Pumo says these conversations can begin as early as infancy, and by doing something as simple as teaching your child the correct anatomical names for their body parts and discussing consent at an early age.

Pumo also says parents must feel comfortable demanding more from the institutions their children interact with, whether it be schools, after-school programs, sporting programs, or places of worship. "Every school now has lock down procedures and sheltering procedures: how many schools have sexual-abuse prevention? And what’s a greater risk to our children?" she asks. "So we have to demand more of the institutions our children are interacting with."

Most importantly, as parents we must put down our proverbial pitchforks and admit that we are not immune to the egregious lack of oversight that now, looking back, seems so apparent in Leaving Neverland. Because like us, the parents in this profound documentary love their children.

"I was so fortunate to have a baby," Stephanie Safechuck says at the beginning of the film. "I remember just having him and being overwhelmed, just crying over his crib. That he’d always be alright. He’s my love.”

Knowing what we know now, that statement breaks your heart. Because it’s not that the parents didn’t love their children, but that they bought into the fantasy of Neverland itself. Not the fame. Not the mansion. Not the money or the theme park or the celebrity. The fantasy was always the idea that this cannot, will not, happen to you.