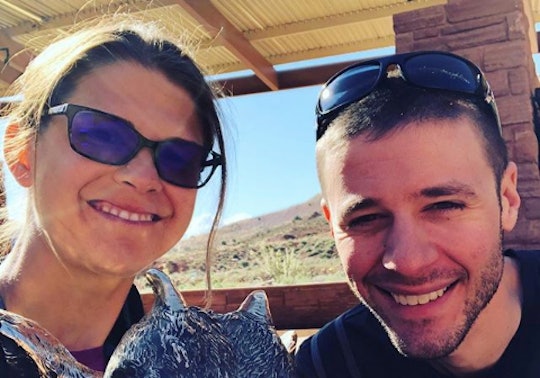 When The Two Week Wait Isn't What You Think

Jackie and her husband have been trying since late 2016. She suffers from hypothalamic amenorrhea, and this is the eleventh installment of her Trying diary. You can read the previous entry here.

I wasn’t alone, although JP wasn’t with me. This time it was my mother, half-asleep on the couch in the sitting area in our suite at Disney’s Coronado Springs resort that heard my “Goddamnit” when I got up at 4 a.m. to piss and saw red.

“I’m sorry,” she muttered. I stumbled back into bed and tried to sleep.

I was expecting this to happen two days earlier. But this two-week wait felt different. When Aunt Flo didn’t come on the 2nd, I was intrigued. When my toilet paper was dry on the 3rd, I was even more interested. But I was cramping like crazy, which brought the dread of pre-period cramps.

So I wasn’t surprised with seeing blood on the 4th, but I was definitely bummed.

I ate my emotions again (which is wicked expensive in Disney, by the way.) I stupidly picked a fight with my mom at dinner in the hotel sports bar, wandered around the resort in the dark and went to bed.

Mom had a 4 a.m. wakeup the next morning to get on a flight back home. I helped her get ready, and at 5 a.m. I was sitting in my hotel room restless. So I did what I usually do when I am restless: go for a long run. I was tired, I was slow, and emotionally upside-down.

JP was happy to see me when I returned, but I just was sullen and withdrawn. The next morning, we would go to the doctor for another ultrasound and see what was next.

Most docs would not move forward with an injectable round at this point, but he was willing to do it if we wanted to.

Dr. S was pretty frank when we walked in the door. “Does your insurance cover IVF?” he asked.

He asked because the more times we do IUI, the less likely it was going to be successful so maybe it was time to move on to more aggressive treatment.

As for this month, the doctor was visibly perplexed when he looked at the image of my lady parts. “Is there a problem?” I asked. He was quiet. “Hang on, I’m thinking.”

He said “there was a lot going on” in my uterus and ovaries: a “clot” in my uterus, and multiple corpus luteum — what results of a follicle after ovulation — floating around my ovaries. Both should go away, but the old follicles kind of make it difficult to figure out which are active and which are decaying — kind of important if you’re basing meds on how big and how many follicles are growing.

Most docs would not move forward with an injectable round at this point, but he was willing to do it if we wanted to.

JP and I huddled: if we were down to limited bullets with the less-expensive IUI, why waste them on a situation like now when we can wait until my body calms down a bit? That was my thought. JP was sick of waiting, but deferred to me.

I told Dr. S we were going to hold off.

“Did you ever take a pregnancy test?” he asked before we left. I didn’t because I was bleeding, even though it only lasted about a day.

“Take one today, just in case,” he said.

“Hey JP?” I hollered from the master bathroom while he was fiddling in the kitchen. “Come here.”

He bolted up the stairs. “Tell me what you see?”

He grabbed the instructions from the pregnancy test and read them probably five times, eyes darting between the paper and the pee stick.

It was surreal. I may be miscarrying, who knows, but I’m pretty sure I am pregnant.

We dial up the on-call nursing service, but they don’t respond. We decided to move on with the day, drive up to the aquarium in Sarasota, make a light dinner, try and relax.

The nurse assistant gets back to me on Monday. She sends me to the blood draw station to get a “beta” HCG level to confirm the pregnancy. I wait nervously for the results.

I felt like I was on Maury when she called me back.

“You are most definitely pregnant. Congratulations!”

I didn’t feel elation. I felt relief. Then fear. There was so much that could go wrong. But it all made sense.

Six weeks and three days after my last menstrual period (not really, but whatever, that’s how the doctor is measuring it) I went back to the fertility clinic for my first OB ultrasound. They had to move the appointment up a few days, and JP had to go pick up equipment in central Florida, so I was alone at the appointment.

Dr. S moved the wand around, scanning my uterus.

“You’re going to die right now,” he said. He started counting blobs on the screen.

More Like This
I Found Gender Euphoria In My Second Pregnancy
Can You Bowl While Pregnant? Experts Weigh In
Turns Out, You Can Dilate Pretty Far Before You Actually Go Into Labor
Everything To Know About Pilates During Pregnancy