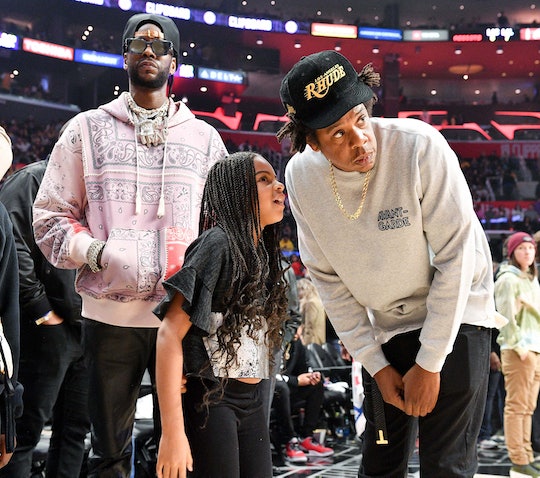 While there are plenty of Beyoncé fans out there who would feel a little star-struck when meeting the youngest Carter, even Queen Bey's mini was left feeling a little shy herself at the Los Angeles Staples Center on Sunday. Blue Ivy met LeBron James after watching the game with her dad, and the entire interaction was, in a word, wholesome. Despite her nerves, Blue made her way to the court and asked her idol for an autograph.

Los Angeles Lakers beat the Los Angeles Clippers with a final score of 112 to 103, but Blue was the real winner after working up the nerve to speak to James. At first, the 8-year-old was hoping that her dad would ask the basketball star for an autograph. "I can't do it," Jay-Z responded, per a video shared by ESPN. "If you want it, you gotta tell him… You almost got it out. Yeah, just do it."

When Blue worked up the courage to ask, James was more than willing to help her out. "You want a ball from me? OK, I got you," he told her before promising to get it to her "soon." "You got school on Monday?" he asked. "By the time you get out of school on Monday, you'll have it."

Just when I thought that her interaction with James was the best part of Blue's visit to the Staples Center on Sunday, I caught a look at the back of her jean jacket. Over top of her black pants and gray shirt, the little superstar was in an oversized denim jacket with the phrase “BLUE IS MY NAME” printed in white lettering across her shoulder blades. To top off the ensemble, she wore a pair of flawless Fendi combat boots.

This beautiful meeting of the minds was quite the sight to see. Overcoming nerves when meeting someone as famous as James is far from a small feat and Blue can surely add that courageous moment to her long list of accomplishments. And kudos to Jay-Z for facilitating that moment of growth for his little girl.