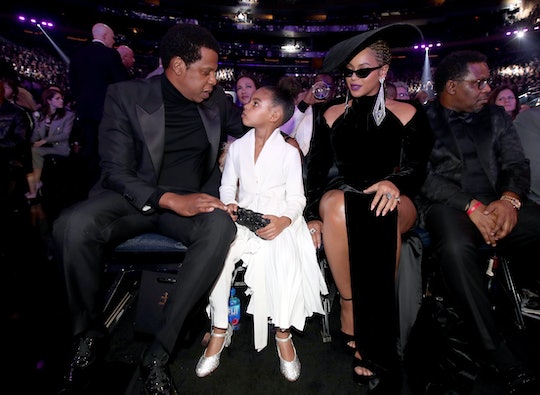 If you thought the most highly anticipated guests at the 2018 Grammys were Beyoncé and JAY-Z... you'd be like halfway right. Truth be told, everyone knows their oldest child is the star, which is why when Blue Ivy told Beyonce and JAY-Z to stop clapping at the Grammys, literally everyone was here for it. (Including me. I know what it's like to have your own daughter tell you to stop, Bey. We can meet for Target and Starbucks to discuss.)

Right before Camila Cabello shared her incredibly moving speech about immigration with the Grammys crowd, the cameras spotted both Beyoncé and JAY-Z clapping politely, but not for long. Like every good 6-year-old, Blue Ivy was keeping an eye on her famous parents and felt it was her civic — no, iconic — duty to tell Bey and JAY to simmer down and give up their applause. In the clip, Blue Ivy holds up one hand to her mother, who bends down to hear her child speak, stops her applauding, and then watches as Blue Ivy turns to her father to offer another hand in the air. "Please," she seems to be telling them. "Pull yourselves together here."

Of course, Twitter took major notice. And whether the majority of these Twitter users are parents or not, there's one thing they know — this isn't bratty behavior. This is a 6-year-old doing what she does best — keeping her parents in check.

Listen, I have a 3-year-old daughter. If there's one thing she's good at (she's good at lots of things), it's expressing herself. Whether that's by telling her father and me to stop laughing so hard because it "hurts her ears" or telling me to "STOP! STOP TALKING, I have to tell you something." Like Blue Ivy, she has plenty of confidence in shooting me a "Mom, cut that sh*t out right now look."

And let's just say, JAY and I have the same face when our child admonishes us. That look he gives her that's like, "Ma'am, excuse me, you are 6 years old" is the same face I make. And listen, JAY. I know you've got a few more years of experience with this whole parenting thing, but they truly don't care. Blue Ivy doesn't care what face you make and neither does my kid. She told you to stop clapping. That's all she wants you to know.

I also just have to say that I'm so glad I'm not reading any terrible tweets like, "Someone tell that child to learn some respect" or "Wow, that was rude." I only bring this up because I've definitely heard it before with my own leader of a child. I can't tell you how many times she's told me in a grocery store to stop singing or how many times she's said, "Mommy, get a grip. That's enough now" when I do something she doesn't approve of. And the looks I get? In public, it can range from a sigh from a fellow mom and a, "Dude, aren't kids assholes?" to someone scoffing or a family member saying, "Mm. Better get that attitude of hers in check."

But you know what? Girls like Blue Ivy and my daughter are going to rule the world — starting with proper applause etiquette at the Grammys. I mean, come on Bey and JAY. Blue couldn't even hear what was being said with your robust clapping. Simmer down. As my own kid says, "Get a grip."

Don't worry, JAY. No one thought anyone but Blue Ivy wore the pants in the family anyway.