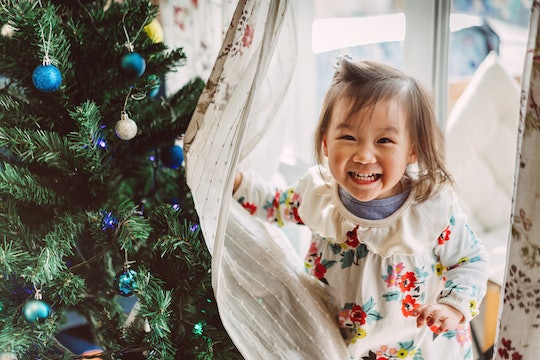 So, Your Baby Was Born On Christmas Day

This time of year, avoiding giving birth on a holiday is essentially as difficult as avoiding paying rent in Monopoly when every property is covered with hotels. There’s Halloween, Thanksgiving, Hanukkah, Christmas, New Year’s Eve, New Year’s Day... plus all those small holidays in between. So if you could choose to schedule your due date to avoid one of the holidays, should you consider it? And if you do give birth on one of the big holidays, is your baby doomed to the worst.birthday.ever?

As soon as she found out she was due on December 20, Ellie Codd thought to herself that with her luck, her first baby would arrive on Christmas day.

“I was right,” said the London mother of three. “I woke up in labor on Christmas eve, and boom, 3 a.m. on Christmas day, she arrived.”

Today, Zoe Codd is nearly 12, and the family has devised a complicated scheme to make sure the Christmas baby feels like she has her own celebration.

They celebrate her birthday on the final Saturday before Christmas, which is a floating date annually.

“We call it ‘her fake birthday’ like the Queen, who has two birthdays, and we always take her out and give her presents and cake on that day,” Codd says.

Then, on Christmas day, the family wishes Zoe a happy birthday but they also celebrate Christmas without the focus being a birthday. They also do another celebration for Zoe on her half birthday so her friends can celebrate with her, as her December dates are too packed for friend parties.

“It means she gets a summer celebration when her birthday is actually in the winter, and in the end with her fake birthday, real birthday and half birthday, she has lucked out,” Codd says.

The half birthday celebration is a common theme for those with holiday birthday babies.

She’s planning to celebrate his half birthdays in the future so that he’ll get the attention he deserves, but like the Codd family, she also wants to do something in December.

So Ullum began planning her son’s first birthday four months ahead of time.

“I wanted to find a location with the least amount of holiday decor as possible,” she says.

Invitations will go out more than a month in advance to save the date for his party, and the theme won’t have anything to do with the holidays or even winter: it’s One Hit Wonder.

“I’ve also asked those I’m close with to help keep the birthday separate from the holiday,” she says.

Some people, however, are thrilled that their children share a birthday with a holiday.

“I feel like his special birthday was meant to be,” says Wright, whose son was born nearly eight years ago on New Year’s Eve.

They celebrate with all his friends, sometimes a few weeks before his birthday and sometimes after. They also try to do something special the day of his birthday, such as a party at the zoo or spending time at the park.

When he gets older, Wright says, they may host his friends for a New Year’s Eve sleepover where they stay up and do the countdown.

“I say, ‘It’s a special day for a special boy,’” Wright says. “Now that he’s getting older, he thinks New Year’s Eve is a cool day for a birthday.”

Christmas is pretty cool for a birthday too, as presents upon presents are what greet Pearl Martin-Drake’s son every December 25. Instead of celebrating it on a different day, he embraces the holiday and his birthday, taking advantage of his situation.

Everything decorated so beautifully, everything smells delicious, there’s hot cocoa everywhere he turns, but he also feels like he’s double-lucky, says Martin-Drake.

“Now that he is bigger, he goes the extra length of meticulously writing us a list, drawing the specifics of how his toys should look, and what brand they should be,” she says.

One holiday birthday had a really special meaning for the Aliberti family.

Lara Baez Aliberti is originally from Paraguay but lives in New York, and her daughter was due on July 5.

When she arrived one day earlier, Aliberti was very excited at the prospect of fireworks on her birthday.

On her first birthday, Aliberti decorated with stars and stripes, throwing a traditional American barbecue for her family and friends. The party favors were sparklers.

Now that her daughter is 2, celebrating the Independence Day birthday is getting a little harder, as most family members and friends are out of town that day.

With fireworks, of course.