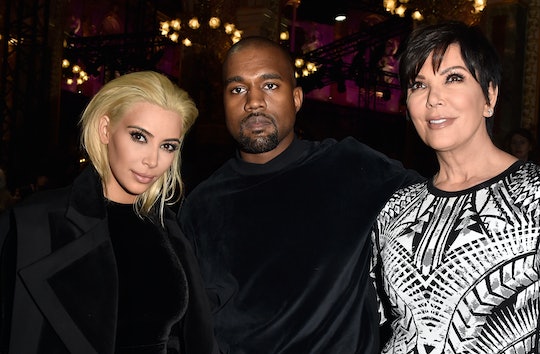 For some lucky women, being pregnant and giving birth feels like a glorious and easy dream. For others — including reality star Kim Kardashian — it's really, really hard. The mom-of-two has made no secret of the difficulties she faced during her first two pregnancies and deliveries, not to mention the fact that she didn't even sort of enjoy being pregnant. But any woman whose pregnancy was a struggle can tell you that complications don't always necessarily mean you don't still long to have more children. On Sunday's episode of Keeping Up With The Kardashians, Kris Jenner offered to be Kim Kardashian's surrogate as she continued to weigh her options about adding to her family. And while Kardashian didn't exactly seem thrilled by the prospect of having her mom carry her child, it's a pretty big deal that Jenner was at least willing to volunteer for such an important job.

According to Us Weekly, the surrogacy conversation came up after Jenner received a letter reportedly from a member of an unnamed "royal family," wondering if she'd be interested in harvesting her eggs. At 61 years old, Jenner might not seem like the ideal egg donation candidate, but she was clearly intrigued enough by the idea to actually get checked out by a doctor. The verdict? According to People, Jenner told Kim her eggs likely weren't viable — but that it was entirely possible she could still carry a baby.

In response to her mother's news, Kardashian asked if that meant she'd be interested in carrying her child for her — and as it turned out, she actually was. Jenner told her daughter that she would "do it in two seconds" if she "really thought [she] could carry it ... and that it would be born OK."

That's definitely a testament to to the kind of love Jenner has for her girls, but it turns out that she isn't the only one who would be more than happy to help Kardashian have another child. Kardashian's big sis Kourtney, herself a mom of three, chimed in by saying, “I already offered myself. So, don’t act like you’re the only Mother Theresa in here!”

Kim didn't seem very eager to take her mom and sister up on their offers, but then again, that's not entirely surprising. Despite her difficult pregnancies, Kim has been upfront about her desire to carry another child herself, and it can be very difficult to let go of that dream, even if you know it's probably for the best. But if she does end up getting pregnant, she'll likely be going against her doctors' advice: according to C Magazine, Kim suffered from preeclampsia and placenta accreta during her first two pregnancies, both of which are serious pregnancy complications that could have been fatal, according to HealthTalk.org.

At the same time, Kim wouldn't necessarily have to choose a member of her own family if she were to decide to go the surrogacy route. She could be linked to a surrogate through an agency if she wanted — or she could just put the word out to her mom squad. In November, Kim's celeb mom BFF Chrissy Teigen told Access Hollywood that she "really enjoyed the pregnancy process," when pregnant with her own daughter, Luna, and that she would gladly be Kim's surrogate "in a heartbeat" if she wanted. Now that is friendship.