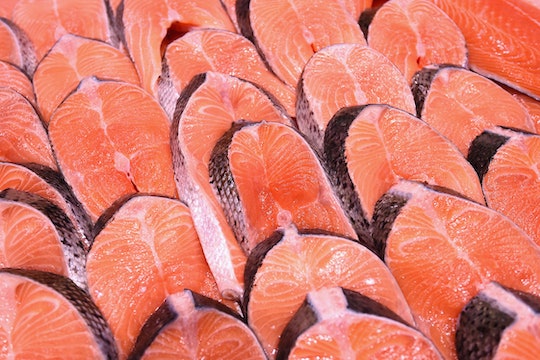 Food allergies are serious business, especially when young kids are involved. The public was reminded of this on Tuesday after a young boy died from smelling fish, an incident that's understandably frightening a lot of parents. Although this is a rare phenomenon, it's completely possible to suffer a medical emergency from inhaling fish fumes.

Camron Jean-Pierre, an 11-year-old boy from New Jersey, died Tuesday possibly due to a fish allergy, according to Insider. Jean-Pierre didn't eat any fish that day, but his Brooklyn-based grandmother — whom he was was visiting — did cook fish around that time. Now the New York City Police Department suspects that Jean-Pierre "potentially died from a fish allergy when his body sensed the food in the air as it was cooked," Insider reported.

Jean-Pierre's father, Steven Jean-Pierre, told the New York Post that the incident happened right after they walked into his mother's apartment.

“It just so happens they was cooking it when we came in,” Steven said about entering the home as his mother cooked cod. “Usually he don’t get nothing that severe.”

Steven tried to give Jean-Pierre a nebulizer (a machine that turns allergy medication into mist), but it failed.

“I [tried] to give him the machine — that usually works — but it didn’t take, and then I just called the ambulance,” he said.

Understandably, Jean-Pierre's tragic story is setting off alarm bells for parents who have children with allergies. And some people are wondering: Is it possible for people to suffer a deadly reaction from smelling fish? The answer is yes.

Adela Taylor, who chairs the allergy and asthma center at Mayo Clinic Health System in Eau Claire, Wisconsin, told The Washington Post in an email:

The fish protein that is responsible for the allergic reactions is very stable when cooked. Published research articles indicate fish protein can be detected in steam and fumes during cooking or processing. It is possible that a person who is exposed to cooking steam or fumes, especially in an enclosed space, could have an allergic reaction.

Taylor pointed out the rarity of these occurrences, however. She added:

There are case reports of severe allergic reactions, including anaphylaxis, from inhalation of fumes from cooking fish, but it is a very rare presentation.

Although these scenarios aren't necessarily common — as Taylor mentioned — they do happen. A study published in Clinical and Molecular Allergy, for instance, found that an 8-year-old girl experienced anaphylaxis (a severe, potentially life-threatening allergic reaction, according to Mayo Clinic) while her mother boiled potatoes.

To keep you and your kids safe, alert your loved ones and friends about allergies within your family. It's OK to ask your friend to avoid cooking a certain food at their home while your child is present.

Additionally, make sure everyone at your child's school is aware of their allergy. Some schools have high turnover rates staffing-wise, so don't hesitate to send a reminder to stakeholders now and then.

Jean-Pierre's heartbreaking death is a reminder for parents to remain vigilant regarding their children's allergies. Although this type of situation is rare, it's completely possible to suffer a medical emergency from inhaling fish fumes.