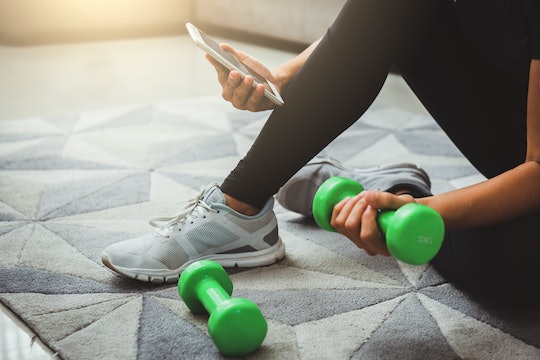 If you were hoping to pull a fast one over on your kids, Shenna Latavao's experience will remind you that it's not so easy. But it sure is hilarious. The Washington mom recently filmed her son's reaction to her pretending to be a fitness influencer and boy oh boy, he did not let her have one inch.

Latavao tells Romper that she came up with the idea to prank her son after watching the viral fake influencer challenge on TikTok. For the challenge, women pretend to stream live videos as influencers, fitness or otherwise, while actually filming the reactions of their partners to whatever they might be saying. All of it either exaggerations or outright fibs, all done to see if they can get their partners to call them out, burst out in laughter, or what have you.

Latavao's son DJ's reaction, however, is perhaps the most hilarious of them all. Latavao says she and her two sons were hanging out in the living room after she got off work when she decided she would try out the challenge on DJ. "Because I know he knows me well enough to know I wasn’t telling the truth," she says. And boy was she right.

In the video Latavao shared on Twitter, young DJ was playing video games when his mom started pretending to talk to her followers about how she has been "working out every day." He turns to her and says, "Uhh... no you haven't." It's not just his words though — that raised eyebrow, the way he pauses and stares at his mom willing her to be honest. Amazing.

Eventually he whispers to her, "What is wrong?" and then turns from her in what looks to be true disappointment. It is one minute of pure entertainment that nearly 3 million people have already watched.

People could not get enough of DJ's facial expressions and brutal honesty. As one person commented, "Haha you’re raising an honest man right there lol and he looks like such a little character, bet he makes everyone laugh with those facials."

Another person wrote, "I love him!!! You raised him right!!! It’s easy to let people lie to themselves and call them crazy, especially family. It takes real integrity and courage to stand up to people that lie. And to his mom! I’m proud of him and you for raising him right!"

DJ apparently loves it, too. According to Latavao, when her video started to go viral she called DJ from work to tell him, but her son didn't really believe it. "When I finally got home and showed him my tweet and how my phone was going off nonstop, it finally hit him," she says. "He saw all the gifs & screenshots of his facial expressions and he could not stop laughing! His face stayed lit the whole time! He kept asking me to show him the gifs over and over again."

There's nothing like a kid to keep a person honest, is there?