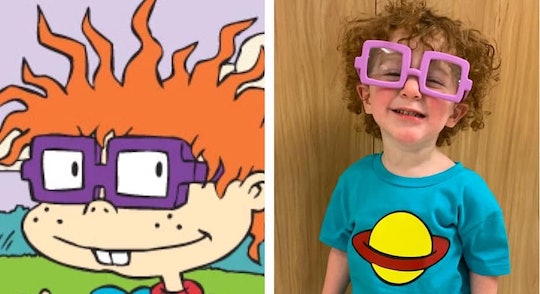 Do you remember Chuckie Finster from Rugrats? Nervous best friend of the intrepid Tommy Pickles, always suffering from a bit of a stuffy nose. Luscious red curls, iconic purple glasses, fan of Reptar, and terrified of Tommy's cousin Angelica? If you were alive in the 90s you almost certainly remember him. If not, I suggest you watch some Rugrats reruns on Nick Jr. to acquaint yourself. There's a specific type of spirit embodied by young Chuckie Finster, a temperament that feels almost impossible for anyone to emulate. Well maybe this kid, whose Chuckie Finster costume for Halloween might even melt the cold, vindictive heart of Angelica Pickles. And trust me, everyone, that's really saying something.

Texas mom-of-three Lainey Paschal should be giving herself a big pat on the back this Halloween, because she truly managed to capture the essence of Chuckie Finster for her son Zacariah's costume. Sure, anyone could go ahead and slap on the same green shorts with lime green squiggles that could be snakes (or is he always wearing swim trunks? Tough to say) and call themselves Chuckie Finster. But Paschal managed to capture the enduring sweetness of the Rugrats character when she recreated his look for her son, telling Romper she was inspired by her own "childhood and love" for the cartoon.

Or perhaps it's the little boy himself who captured Chuckie's spirit on his own. All I know is this: Lainey Paschal was right when she captioned the picture of her son dressed as Chuckie Finster, "I say we nailed it!! he's so dang cute."

While there are plenty of costume suppliers out there selling Chuckie Finster glasses and wigs (including this one for grown men that I'm not 100% sure I can support), this little boy has that certain something to really pull it off. It could be his giant square purple glasses, his t-shirt featuring the planet Saturn, or his red curly hair that is actually his own, which his mom tells Romper "made it that much more of a reason to do" the costume.

But I suspect it's his glowing, proud smile that really makes this costume authentic. Not that anxiety-prone Chuckie Finster was especially known for his sunny disposition, mind you, but he sure made anyone who watched Rugrats smile so that's enough. In fact, Paschal says her little boy also has "such a sweet disposition" that they "knew it would be a perfect fit!"

Certainly social media users are already in love with the costume, with people sharing comments on Paschal's post like, "That's the cutest costume I've seen! I can't wait!" as one person wrote. And another said, "Absolutely adorable!... You won Halloween."

Other parents noted on Paschal's Facebook post that this has inspired them to try a Rugrats-themed Halloween themselves, although if anyone dresses as Tommy Pickles they're going to get awfully cold wandering around in a diaper.

I wish I could see the reaction this Chuckie Finster costume gets on Halloween. I suspect other little kids might be slightly bewildered (although not for long since there is apparently a live-action Rugrats movie in the works) but parents will love it. Because we all have a soft spot for the Rugrats gang, even Angelica. But probably mostly Chuckie, who was sort of afraid of everything but persisted nonetheless. A modern day hero.

More Like This
Can You Light Fireworks In Your Backyard?
20 Family-Friendly Movies To Watch With Your Kids On The 4th Of July
These 30 4th Of July Memes Will Crack You Up
Bright & Festive Nails To Rock On July 4th