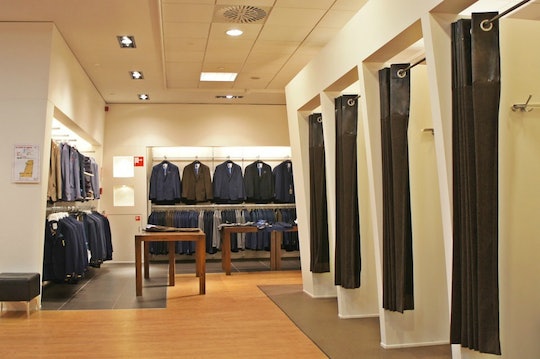 It can be so hard to keep track of children when you're out shopping, but it's hard to imagine that a minute with your back turned could have tragic consequences. This weekend, a boy's accidental dressing room death drudged up a heartbreaking conversation about child safety concerns. Ryu Pena, 4 years old, was shopping with his grandmother at Again Thrift & More in Mankato, Minnesota, when he ended up in a changing room alone with the door closed. After climbing around the stall, his hoodie somehow got caught on a hanger on a hook and since his feet couldn't touch the ground, he accidentally hung himself.

His grandmother and other people in the store were looking for him all around and outside of the store — no one could see his feet under the door — until someone walked out with Ryu, too late to save him.

Commander Jeremy Clifton with Mankato Public Safety told WCOO, a local CNN affiliate, “We believe that he got himself caught up on a coat hook within that dressing room area and couldn’t free himself from it." He added that all parents can do is make sure they have eyes on their children at all times, since accidents like this can happen in an instant. But as any parent knows, that can be near impossible sometimes.

Ryu's mom Denise Gonzalez said that, like any 4-year-old, Ryu was an active child. "He was playing because he's very curious, adventurous, and it all just happened so quickly. He was such a daredevil," she said, remembering that he liked to do jumps and flips.

Unfortunately, on the GoFundMe account that a relative has set up to help the family pay for the funeral expenses, there are a lot of comments chiding the grandmother or running through "if it were my kid" scenarios, similar to the sort of hateful reception the mother of the 4-year-old boy who fell into the gorilla exhibit at the Cincinnati Zoo last zoo this summer encountered.

It's cruel and unnecessary. It could've been any toddler who slipped away while any parent or caregiver turned away for a minute before frantically looking for their kids. But when a tragedy like this happens, it's hard to not want to evaluate the situation and see if there was anything — besides bashing a caregiver or a toddler — that could have been done differently.

Obviously, there are things that stores can do, like locking dressing room doors, or ensuring that there aren't any crawl spaces for tiny adventurers to weasel under. Retailers can also baby-proof doors and hooks and outlets. Surely, there will be some sort of investigation to see if the store was up to code, but when it comes to dressing rooms and a toddler climbing around by himself, everything could have been in order and something like this could still have happened. That's the heartbreaking reality about kids — sometimes, things just happen.

At least for the time being, the most useful thing to do, rather than bashing an already-grieving family online, would be to send your thoughts to the little boy's loved ones. And hug your kid.