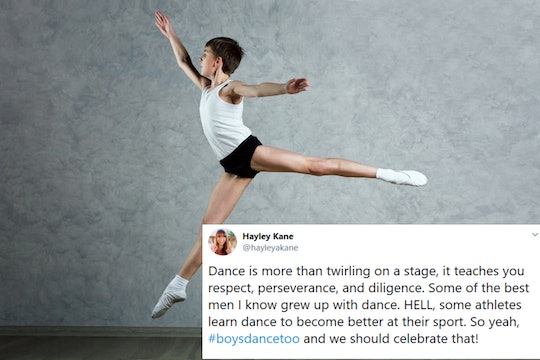 When my son was about four years old he took dance classes. For around six months I would drive him to his class in his little black shorts and t-shirt where he would happily pile into the studio beside tiny girls in buns and leotards. Every night he came out of class sweaty and smiling and full of stories. Until it all stopped. One day he came storming out mid class and said to me "Drive me home, I'm the only boy in the class." Someone shamed him, I'm sure of it. Which is why #BoysDanceToo is such an important trend on Twitter after Good Morning America's Lara Spencer mocked Prince George for taking ballet. No more boys should feel embarrassed doing anything that brings them joy.

More Like This
Tweens Will Be Obsessed With These 20 Podcasts
Kids Can Read For A Free Personal Pizza This Summer — Just Like You Used To
How To Find The Best Insect Repellent For Your Kids & Babies
Vaccinated People Can Ditch Masks. Where Does That Leave Kids?

During a recent episode of Good Morning America, Spencer was talking about 6-year-old Prince George's school curriculum when she brought up the fact that he is taking ballet classes like his 4-year-old sister Princess Charlotte. Spencer was scrolling through photos of the young prince when she noted that his father, as per People, “Prince William says George absolutely loves ballet. I have news for you Prince William: We’ll see how long that lasts." As though a boy loving his dance class should be a pleasure with an expiration date.

This is one of those situations where the internet is a beautiful place. Because people are sharing photos and videos of men and boys dancing on Twitter as a reminder that #BoysDanceToo.

Like this little boy dancing to Taylor Swift's "Shake It Off" and just killing it, for instance.

Or this Marine who credited ballet for preparing him to serve his country, as he wrote in an Instagram post:

Ballet prepared me physically and mentally to serve in the US Marine Corps. Now as a US/UK Fulbright alum, Artistic Director of Exit12 Dance Co, and an international artist, ballet gave me the tools to be successful. The effort of bettering yourself artistically, enduring challenges, and, in some cases being bullied for it should be championed, not belittled by small minds.

The Washington Ballet took to Facebook to share the story of one of their own dancers, Corey Landolt, who opened up about being bullied for dancing as a kid:

I was called awful three and four letter names from the age of 11 to 14 or so. I was pretty small and got beat up a couple of times. Just for dancing ballet. Because it's seen as something only girls do.

It's important to note that Spencer did share an apology for her "insensitive" comments on her Instagram feed. But here's the beautiful thing; the trend of supporting sons, brothers, friends who want to dance ballet has moved on from simply responding to an insensitive comment. It's becoming a movement.

We live in a world where people complain about toxic masculinity and shame little boys for wanting to dance in the same breath. It has to stop.

Because of course boys dance too. If they're not made to feel ashamed.