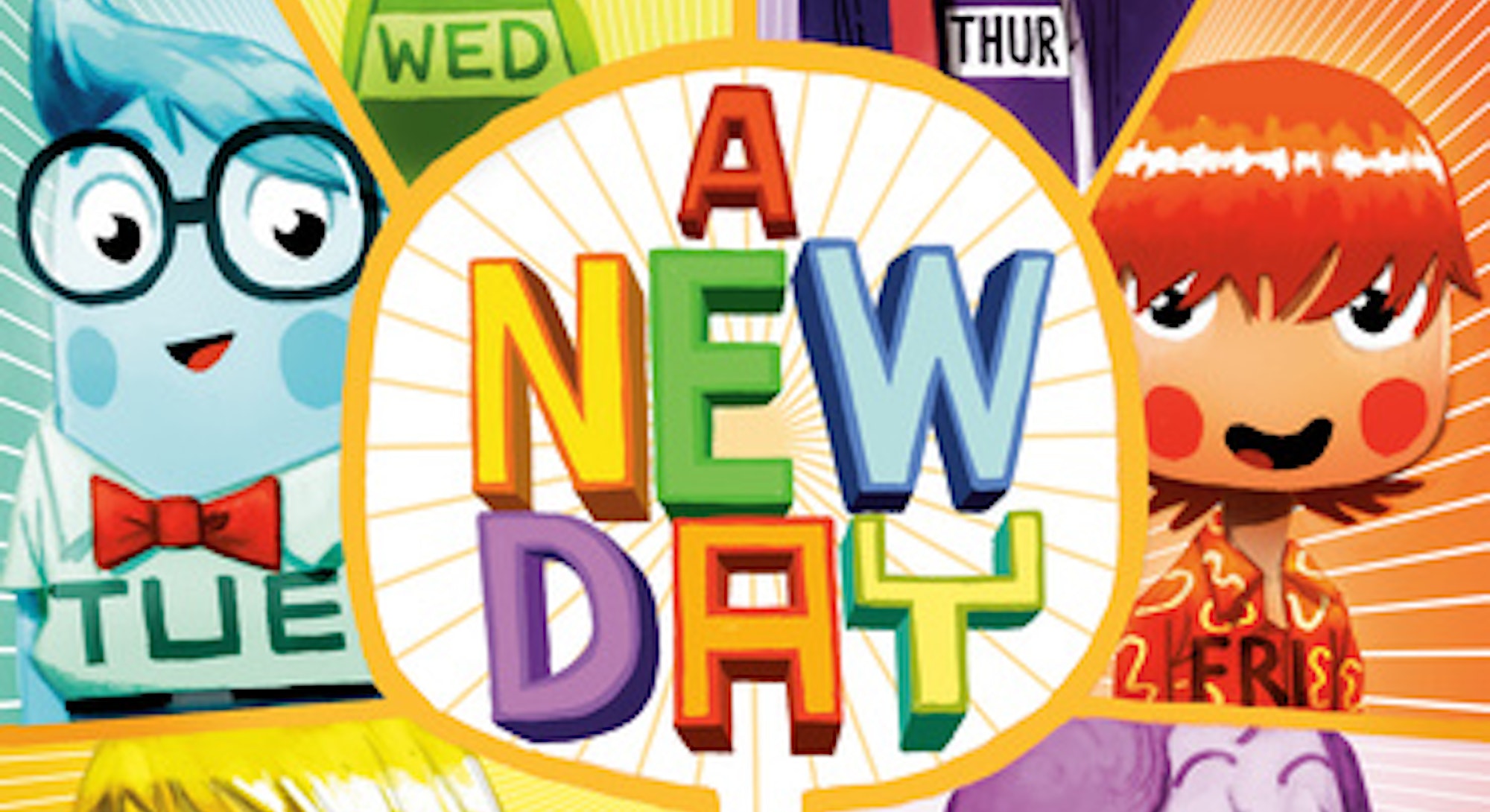 When no one ever goes anywhere, the days have a tendency to run together. Weekdays roll into weekends without much fanfare, and it's easy to take Sunday for granted — until Sunday quits. Such is the predicament faced by the heroes of A New Day, the first collaboration between author Brad Meltzer and illustrator Dan Santat: The other days of the week haven't lost a day since Marsday quit yonks ago, and now need to find a chill day (but not too chill! No one can handle two Saturdays) to replace the easygoing Sunday. The solution? They place a wanted ad.

A tournament of the minds takes place, as people audition and offer their best ideas up — BokChoyDay? Acrobaturday? — before a young girl offers a small thank you to Sunday for the things she was able to accomplish on the most unassuming day of the week. The kindness she shows is enough to convince Sunday to return to the roster, and a reminder for young readers that no matter how frenetic some days can be (no offense to the Type-A stylings of Monday), kindness can make each day feel like a new opportunity.

A New Day will be released in March 2021 from Penguin Random House, and Romper has a sneak peek at the cover, as well as an interview with the team behind the book. Bestselling author Brad Meltzer, who has written the Ordinary People Change the World series for kids, but is also widely known for his thrillers, opened up about stumbling on the storyline, and Dan Santat, the Caldecott Medal-winning illustrator behind The Adventures of Beekle, as well as Drawn Together and Lift, talked about what a good Sunday looks like for his family, at a time when everyone has been forced to slow way down.

Brad, what was your original inspiration for this story? And Dan, what appealed to you the most when you first read the text?

Brad Meltzer: It is the only book I ever dreamed. I literally woke up, the idea fully formed. I know that sounds nuts. It sounds nuts as I’m telling you this. But. When I woke up that morning, I remember thinking, that’s an actual story. So I scribbled it all down in a notepad before it left my brain — and then I wrote it.

I honestly think that the only reason it was possible was because it came to me in a dream. As for Sunday, you see her answer in the book. You see exactly why she quits. And it’s a reason that so many of us are having today. We’re all worn down. We all need a new day.

Dan Santat: The most appealing aspect of this story was the concept. Personifying the days of the week into characters and then suddenly having one of the days quit was such a shocking concept and so wonderfully abstract that I found it fascinating. It's just fantastic out of the box thinking which also disrupts the way we look at the world, which to all of us, is a universal constant. What would the days of the week be like? What would compel a day of the week to quit, and what would be in Sunday's place?

I learned something new which is also completely useless information to me!

Brad Meltzer: No fair. There’re too many. I love that shot on the unicorn page, where you see everyone from behind. It’s so iconic and beautiful. I tried to convince them at one point to use that for the cover. That’s how much it struck me. Also the Candy page. And the page where the little girl hands over the flower pot and Sunday says, “Did you just say thank you?” That’s Dan at his absolute best. And c’mon, the Lebowski sweater alone!

What is your favorite Sunday activity?

Brad Meltzer: Sleeping late and having all my kids eat breakfast together. We have a lot of competing schedules in our house. I love the one day where the schedules are gone.

Dan Santat: Our family always goes out to breakfast at our local diner. It's one of the few family traditions that we have among our busy lives.

Do you have any advice for anyone who is feeling especially run-down and underappreciated, as Sunday did?

Brad Meltzer: I think everyone has felt that way at least once in their lives. As a parent I know I do. I don't think most people are ever malicious when it comes to gratitude for one's efforts, but sometimes it can be so ingrained in routine that it can be taken for granted because it becomes a cognitive action. When that happens I always take a day or two and treat myself to something nice. There's nothing that can stop you from rewarding yourself for all your hard work. Cut your own apple, kid. Daddy's playing XBox.

Dan, the art in A New Day is so whimsical, did you have fun coming up with the characters for each day of the week?

Dan Santat: When reading the manuscript I think Brad and I were instantly on the same page in terms of the personalities of the characters. The voice of his characters definitely synced with my art from the get go. It really came down to reflecting my own feelings of how I perceived each day of the week and turning those feelings into art. Sunday is the character that is trying to take the last bit of their weekend into relaxing knowing that a new five day work week is upon them. She's wearing sweatpants, doesn't care about appearances, and is really taking the time to decompress, but in a way where decompressing feels a little bit like work. Sunday is very much like my wife who spends half the day stressing out about the upcoming work week.

Monday is the ambitious go-getter Leslie Knope (from Parks and Recreation) type of character. Tuesday is the less rigid assistant who lacks a bit of the initiative of Monday but still has ambition. Wednesday has the pointy top of her hair which is like a balanced meter on a scale for the middle of the week. She's grateful that she's made it to the middle and the rest of the week workload is all downhill. Thursday has a bit of a Wednesday Addams type of persona. She's that cynical person who is perhaps going through a mild existential crisis questioning the whole meaning of life going through the same routine week after week, year after year. Friday is Jeff Spicoli from Fast Times and Ridgemont High. It's casual Friday, he's already dressed for the weekend, already has one foot out the door, and is putting the absolute minimum into his work. Saturday, is my favorite day. He's The Dude from The Big Lebowski. He's the epitome of do nothing, carefree laid back attitude. He wears the same sweater and sweatpants from Jeff Bridge's character in the film. Kids won't get it, but I'm sure some parents will. It was just an absolute joy for me to sneak an Easter Egg like this into a children's picture book. Then to sum it all up, I needed to take all these bold personalities and tie them all together into one group by applying a separate color from the visible color spectrum to each character. Red, Orange, Yellow, Green, Blue, Indigo, and Violet. Seven days. Seven colors. All of which make up a rainbow.

What do you hope kids will take from the reading of this book?

Dan Santat: There's time to work, and there's time to play. In the end we embody all these personalities in order to truly enjoy this thing we call life.