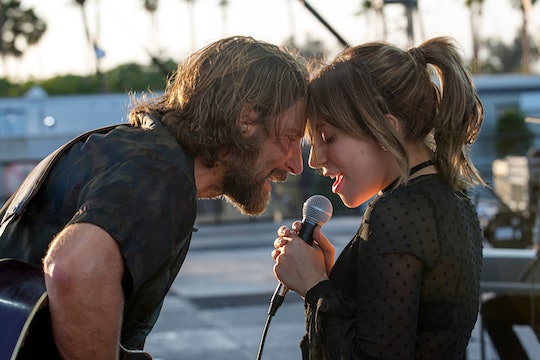 Maybe you've heard of a movie called A Star is Born, and maybe, just maybe, you've heard a rumor that Bradley Cooper and Lady Gaga's relationship is as method as things come; that they are in love with each other and destined to live out their days touching each other's noses and sharing the same microphone. I don't know — you could have missed this whole saga — essentially, the rumor has been fueled by everyone's fascination with their roles in A Star is Born and public behavior since the movie came out.

But maybe it's time to remember that Bradley Cooper has a partner and a child, and the wishes from "well-meaning" fans that he should leave them both for Gaga are getting really, really gross.

Look, I'm all for a good duet. And the parallels between Bradley Cooper and his character Jack, and Lady Gaga and her character Ally, make it so tempting to believe that after starring in such an intimate film — one that has people sobbing their eyes out over true love — the two leads became actual soulmates. Oh, but then you remember that up until recently, Lady Gaga was engaged (the cancellation of her engagement was met with a weird jubilation), and oh yes, Bradley Cooper is still very much in a relationship with Irina Shayk and the two share a daughter together, born less than two years ago. A daughter who listened to Cooper sing songs from the movie while it was in production, he told E! News on the red carpet. Keep that baby — Lea — in mind as I continue.

In order for me to dismantle this obsession, I have to start with the very obvious: Bradley Cooper and Lady Gaga are entertainers. They are literally paid to make you believe that whatever they're doing is actually happening. It's why they were both nominated for Oscars, it's why the movie had such a good critical reception, it's why Bradley Cooper stole Sam Elliot's voice, it's why you think the stars are actually in love. It was their job to make you think that. A Star Is Born is an intense, intimate love story created using a formula that has swayed audiences for decades — a powerful male star plucks an unknown woman from obscurity, and the two fall in love. All of the movie's precursors have garnered Oscar attention. Just so we are clear, we are not talking about Jack and Ally. You can ship them, fine. But wall-to-wall coverage of rumors that Cooper and Gaga are an item cross the line.

Which brings me to my second point: it is actually OK for a man and a woman, especially a man and a woman that have worked intimately together on an intense, emotionally driven, passionate movie, to still enjoy each other's company. It is OK for them to like each other, to look at each other, to hug when they see each other. It is OK for Lady Gaga to have admiration and respect for Bradley Cooper and it is OK for him to look at her like she is a talented, revered person. She is! He does! This is all OK!

Oh wait. Are you going to be one of those people who argues that Lady Gaga's comments about Bradley Cooper prove they love each other? You know, that "There can be 100 people in the room, and 99 don't believe in you. But I had this one [points to Cooper] incredible talent with me" quote that she's been dragged for a thousand times. Because of course if she talks about someone believing in her, taking a chance on her, and helping her succeed, she's obviously meant to be with him.

I do know what it's like to be with someone, to have a child with someone, and to know that person isn't being faithful to you. The fact that anyone would wish this on someone, whether it's a person you've never met or your best friend, is too much. Bradley Cooper, for all intents and purposes, is in a relationship with the mother of his child — that should be enough.

But all of this pales in comparison to the fact that Cooper has been in a long-term relationship with Irina Shayk. The two showed up on the Oscars red carpet together, but their relationship is much deeper than a date to the Academy Awards. An Elle timeline noted that Cooper and Shayk have been notoriously private about their relationship, but they were "officially spotted" as a couple in 2015, and welcomed daughter Lea De Seine Shayk Cooper in 2017. While the two have kept their daughter and their family private, Cooper has shared what fatherhood means to him. On the press tour for A Star Is Born, Cooper told NPR that the birth of his daughter had impacted his art profoundly: "So I guess having a child, and having a family of my own — which is a miracle and something I've always dreamt of — has opened me up even more, I guess, to the day, and to be present."

You hear that? To be present. A dream of his. A miracle.

Those are more than just tidbits of their lives or off-cuts from the press junket narrative of on-set romance — Cooper, Shayk and their daughter are a family. And while I know nothing about their actual relationship — how happy it is, how strong it is, how well they communicate — I do know what it's like to be with someone, to have a child with someone, and to know that person isn't being faithful to you. The fact that anyone would wish this on someone, whether it's a person you've never met or your best friend, is too much. Bradley Cooper, for all intents and purposes, is in a relationship with the mother of his child — that should be enough for Cooper-Gaga shippers to back off and let their movie be just that — a movie.

If fans claim to love this movie so much, to see something deeper in the dialogue and songs than the average person who just doesn't understand true love can, then why can't they use their film-critic monocles to realize that's exactly what the movie is trying to tell you — to beware of what the celebrity industrial complex is selling you.

Is it because everyone thinks of Cooper as the star football quarterback and Gaga is the high-school art-student outcast?

The talk around Cooper and Lady Gaga is enough to make me, a person who has no investment in the couple, freak out a bit. But when you add in Shayk and their daughter, it's officially too much. Fans were quick to notice during the Oscars that Shayk was seated next to her partner, but also next to Lady Gaga, essentially sandwiched between the two.

Can you *imagine* how that must feel? To know that everyone in the A Star Is Born fandom is secretly hoping your partner leaves you to be with his co-worker? Hoping he says goodbye to the family he's made with you because he made a movie with Lady Gaga, and that's way more important? OK, maybe Shayk doesn't care because she's way above that, but I know me and I know my feelings — I would never make it.

And I also know that if Gaga was the one with a daughter, the one with a family to lose if she left it all to be with Cooper, we wouldn't be having this debate. Is it because everyone thinks of Cooper as the star football quarterback and Gaga is the high-school art-student outcast? Are we just trying to make an early 2000s teen movie come to life at the expense of Shayk and her 1-year-old daughter?

And let it be known, this isn't about pitting women against women. Lady Gaga has never formally come out to say she loves Bradley Cooper and wants him to leave his wife and child to be with her. This is about a movie — a well-made, award-winning movie — that has convinced an entire base of fans that a relationship should happen, no matter who's hurt in the process. It's Hollywood, baby.

And with that, I'm taking off my damn hat.