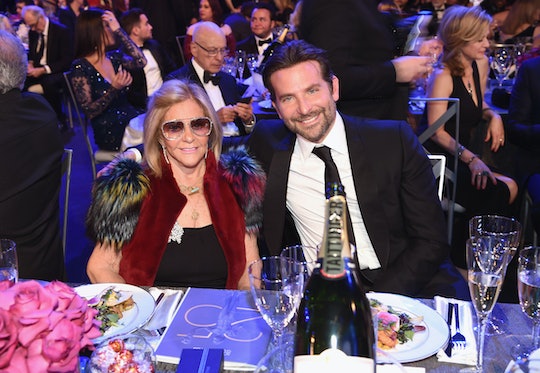 As a mother of four sons, I might have a little chip on my shoulder when it comes to certain clichés about that particular relationship. For instance, if a son is close to his mom in a very real and normal way, it's sometimes considered a negative thing in our western culture. I mean, we appear to want men to be close to their moms, but only sometimes. Fortunately we have some seriously evolved relationships like Bradley Cooper and his mom Gloria Campano to hold up as a shining example, in my opinion. Bradley Cooper's quotes about his mom prove their relationship is the real deal; he's not just putting together sound bytes to make himself seem like a loving son. He just happens to really love his mom.

The Oscar-nominated actor and his mom, who formerly worked for an NBC affiliate, have reportedly always been part of a close-knit family. But their bond deepened in 2011, when Cooper's father died after a long battle with lung cancer. The actor told Esquire in 2011 that he moved in with his parents five months before his father died to be there for his parents. He and his mother remained living together for a few years after he died as well, but before you go thinking that's strange... you have to hear what Cooper had to say about the situation.

As the Hangover actor explained in an interview with Details magazine, per the Los Angeles Times:

My family is very close, and my dad dying was brutal for all of us. It was a schism, and its aftershock has not stopped. And we need each other. So here we are … it's not like I live in a compound and she's in the guesthouse. No, she's in the next room. But here's the thing: she's a cool chick. We can hang, and she can roll with the punches.

While Cooper says his mom is a "cool chick," he's not above teasing her publicly about a little addiction of hers... QVC. As he told Seth Meyers on Late Night with Seth Meyers in 2015, his mom just loves the home shopping channel:

She goes, 'I bought this great … device where if you're driving in the car it can tell you how to get to a place.' And I was like 'What are you talking about? … Mom, it's like Google Maps, like navigation? 'No, it's a device I can carry around with me.'

Gloria Campano got the last laugh though; she was hired as a consultant on the 2015 movie Joy with Jennifer Lawrence because of her home shopping network expertise. As Cooper told E! News, he knew the product in the movie, the Miracle Mop, almost too well:

There were QVC packages on the door step every time I came home from school. The Miracle Mop I actually took to college. It was very embarrassing.

Cooper obviously loves his mom and — no surprise — the admiration is mutual. Campano is frequently her son's date for awards season, as he noted during an interview after he made Silver Linings Playbook, as per PopSugar:

I'm sure the day of [the Oscars] I'll be calming my mother down, she still doesn't know what to wear. So I think I'll be a caretaker that day.

Don't worry everyone, she nailed it.

The Wedding Crashers actor also recently told Willie Geist from the TODAY show that she has a lot of faith in his talent:

My mom's funny because she always thinks everything's gonna be a huge hit.

I think we can all agree that this relationship sounds natural and fulfilling on both ends. Full of genuine friendship as well as the bond between a mother and her son. So let's celebrate adult men hanging out with their moms, shall we?