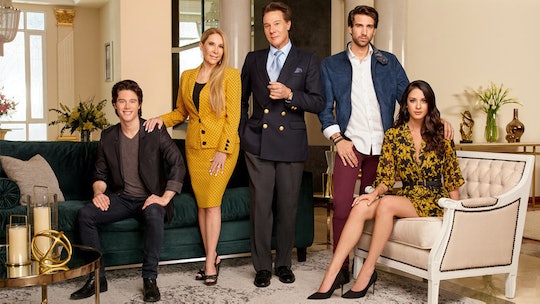 You're Going To Love The Cast Of 'Mexican Dynasties'

From classic shows like The Real Housewives franchise to Project Runway, it's no secret that Bravo is one of the reigning champions of reality television. On Feb. 26, Bravo is premiering its all-new show, Mexican Dynasties, and reality TV fans are already buzzing about the Mexican Dynasties cast — and for good reason.

Mexican Dynasties will follow the lives of three established families in Mexico City: the Allendes, the Bessudos, and the Madrazos. The interesting part? The three families have been intertwined both personally and professionally for decades. And according to Bravo's website, "With both humor and heart, they challenge stereotypes, raise a few eyebrows and proudly showcase their over-the-top lifestyles."

While Mexico Dynasties could be something that simply slips into your Tuesday night routine on television, the show's cast also has a very real challenge to show the world, especially in 2019's political climate.

"Nowadays, Mexico really is in the spotlight in the whole world, and we really wanted to showcase our country and our culture in a very different way," Paulina Madrazo told Entertainment Tonight. "[We want to show] the way that we live it throughout our lives, our eyes, our hearts, and I think that that's why, I mean, we're here, and we're here for good!"

So who will viewers meet when they watch Mexican Dynasties for the first time? Get ready to say "hello" to the cast of your newest obsession.