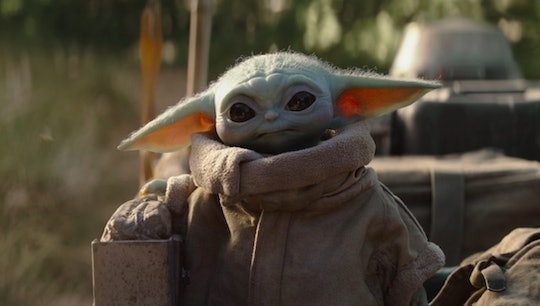 Breastfeeding Baby Yoda Is An Actual Concern, & I Have Some Other Questions

If the viral memes of a cuddly, cute Baby Yoda (aka The Child from The Mandalorian) on social media have your maternal instincts kicking in, you are not alone, my friend. In fact, you're in hilariously good company according to an article about breastfeeding Baby Yoda from MEL Magazine and the Twitter users in debate about how nursing The Child might go.

Three lactation consultants weighed in on the hot topic for the article and honestly, I love it so much. A frank discussion of extraterrestrial mammary glands, at what age Baby Yoda might begin teething, and the merits of having Baby Yoda just float over to you in his little circle pod so you don't ever have to get up have me actual LOL-ing. While the LCs interviewed have plenty of sage advice about what nursing positions are best for getting those adorably large ears out of the way (football hold, obv) and putting baby mittens over his hands to keep his claws (if he even has them) from scratching you, they also had plenty of questions about caring for Baby Yoda — and so do we.

Baby Yoda is already eating whole frogs, as one of the lactation consultants in the article pointed out, so does this mean he is headed toward early weaning? An even more pressing question is: When should Baby Yodas (Yodi?) wean? Baby Yoda is 50 years old, according to CNET. Obviously, a human wouldn't still be nursing at age 50, but human years and Yoda species years are comparable in the same way a dog's age and a human's age are. It's like counting dog years, but in reverse. Let's just say for easy math that a human would live to be 100 and then Yoda lived to be 900, according to Fandom, so every one human year equals nine Yoda years.

That means Baby Yoda would already be about 5 and a half years old in human years. Plus, he clearly already knows how to drink out of a cup that's not a sippy cup, hence the million memes of him holding one. Should he even still be nursing? I don't even want to think about nursing anything for 50+ years, but obviously that is a very personal choice that Baby Yoda's mom must make for herself — no judgement here.

Even if you take the breastfeeding aspect of caring for Baby Yoda out of the equation, what about diapering Baby Yoda? Does Baby Yoda wear a diaper under all of the drapery-like robes he's clothed in? If he does, it's likely not a disposable diaper because frankly, I can't imagine a bulky, white, plastic diaper genie fitting in with the general aesthetic of the Star Wars universe. Come to think of it, I've never seen a toilet in any of the Star Wars movies or shows either, so does Baby Yoda even need to eliminate waste from his body? Maybe all of the nutrition he gets from breastfeeding converts straight into whatever he needs to use The Force and doesn't ever go anywhere else.

Speaking of The Force — let's talk about that flying pod that Baby Yoda rides around in. It's pretty much like a flying car seat, right? Why don't we ever see the epic battles between Baby Yoda and his mom when she straps him into that thing and he goes all stiff surfboard-style like my babies always did? Does he ever get fussy in that thing? Or is he fussy before getting loaded in and the flying around soothes him? So. Many. Questions.

What about a pacifier? Would that soothe a fussy Baby Yoda, or is it frowned upon to use a pacifier with a breastfeeding Baby Yoda? Will that create nipple confusion? I mean, obviously if a human breast nourishing Baby Yoda doesn't create nipple confusion, I'm not sure why I'm even questioning a pacifier, but I'm legitimately concerned about how to soothe something that uses The Force. Would he just chew up a pacifier and spit it out like it's beneath him?

Wise Yoda is, and therefore a budding genius Baby Yoda must be. I'm not sure I personally would want to try to tend to all of the needs of Baby Yoda. The questions about breastfeeding, diapering, and caring for Baby Yoda in general have my head spinning — and I have multiple children. Maybe caring for a Baby Groot would be easier? After all, he just says one thing over and over again, so his wants and needs might be a little more straightforward.