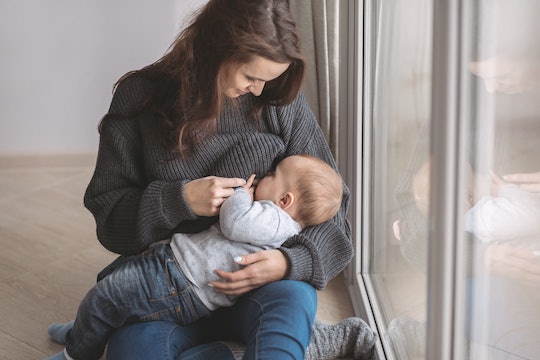 Breastfeeding Can Protect Moms Against This Chronic Disease

According to the Multiple Sclerosis Society of Canada, multiple sclerosis is an autoimmune disease — also commonly referred to as MS — that affects the central nervous system (that is, your brain and spinal cord) and can affect everything from a person's energy levels and coordination to their cognition and mood. Although it's not fatal, its symptoms can take a serious toll on those with the disease, and there's currently no cure for it.

Fortunately for moms, the study recently published in Neurology found that the longer a woman breastfeeds, the lower her chances of developing MS. To get their results, scientists surveyed around 800 women, including a healthy mix of both those with MS and those without. For the study, women with MS were matched with women without MS that were otherwise similar in age, race, income, and education.

Using the women's self-reported answers, the researchers found that breastfeeding for at least 15 months (compared to breastfeeding for four months or fewer) was linked to a 53 percent lower risk of developing MS.

"This study opens up the possibility that along with reducing the risk of heart disease, diabetes, ovarian and breast cancer, breastfeeding particularly for longer durations may also reduce the risk of multiple sclerosis and possibly other autoimmune diseases," lead study author Dr. Annette Langer-Gould told Reuters this summer.

Of course, the study was correlational, so there's still no answer yet as to why breastfeeding is linked to a lowered risk of MS. The study authors theorized that breastfeeding could reduce the risk of MS by lowering pro-inflammatory activity in the body. But at the moment, that theory has yet to be studied.

"It is possible that women who choose to breastfeed, particularly for longer durations, lead an overall healthier lifestyle and that another aspect of a healthy lifestyle that we did not measure could explain these findings," Langer-Gould told Reuters.

While researchers might not be able to explain why the connection exists, it's seems to be there — and it's just one more positive benefit for moms when breastfeeding their babies.