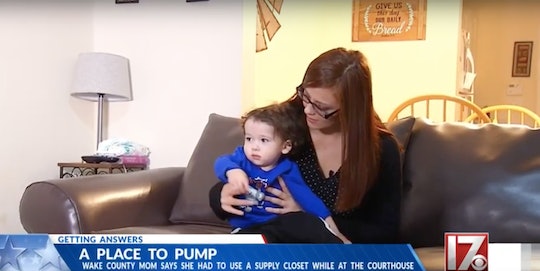 While all 50 states have laws allowing women to breastfeed in public and private spaces, finding a suitable location to pump can sometimes be a bit trickier. Take for example, North Carolina, where a breastfeeding mom on jury duty was offered a supply closet when she needed a place to pump. That mother is now advocating for public spaces like office buildings and courthouses to better accommodate breastfeeding moms.

When Amanda Locklear arrived at the Wake County Justice Center in Raleigh, North Carolina, on Monday, she was reportedly one of three nursing mothers called for jury duty that day, according to CBS17. And when she asked the clerk for a private place to pump milk in, she told CBS17 that she was shown to a what was "essentially a supply closet filled with boxes and records."

Locklear said the door to the room locked only from the outside, meaning anyone could walk in on her at any time — or worse, accidentally lock her inside. Frustrated by her experience, Locklear took to Facebook to argue that nursing mothers "should receive dedicated nursing spaces and not just temporary ones."

"No nursing/pumping mother should have to sit in a storage closet with boxes of unmarked documents, cleaning products, and whatever else was in there," Locklear wrote on Facebook last week. "Or even furthermore a door that locks from the inside for privacy."

While Romper's request for comment from Wake County Justice Center was not immediately returned, the courthouse told CBS17 that there's a dedicated lactation room — complete with magazines, and a cozy chair and ottoman — on the second floor for nursing mothers. The room Locklear was shown to, however, is reported to be the "private space closest to where jurors are held." It's unclear why Locklear wasn't given access to the courthouse's dedicated lactation room, which she claimed on Facebook was not in the specific courthouse building she was in. Romper has reached out to the Wake County Justice Center for additional comment.

While 18 states and Puerto Rico have laws that explicitly enable breastfeeding parents to postpone or defer jury duty, North Carolina is not among them. Instead, the North Carolina Judicial Branch states that anyone seeking a deferral must have "a compelling reason why [they] cannot serve on the assigned date." Examples of such compelling reasons are cited to include being a full-time student, being over the age of 72, or having "a documented medical reason that prevents you from serving."

But Locklear isn't the only nursing mom to ever run into problems while reporting for jury duty. In 2017, for example, a Minnesota mom told TODAY she was barred from stepping away to pump for an entire morning, despite having previously been told that judges would accommodate her pumping schedule. According to TODAY, the mom reported being told that neither nursing nor being a primary caregiver were "valid reasons" for jury duty exemption. When finally allowed to pump, the mom told the news outlet she was shown to a unisex bathroom, where she had to pump next to a urinal.

After spending almost five hours at the courthouse, Locklear reported that she was dismissed from jury duty after being told she would not be provided with breaks adequate for pumping. "I was told I couldn't get more than a 2-3 —10 minute break to pump (That's the typical bathroom break ... all jurors receive while serving a case) obviously for nursing/pumping mothers, we would need longer," she wrote on Facebook.

Stories like these are exactly why moms like Locklear are advocating for better accommodations for nursing mothers in places like city courthouses. "I just want there to be a clean, safe, and dedicated private spaces," Locklear wrote on Facebook. Who can argue with that?