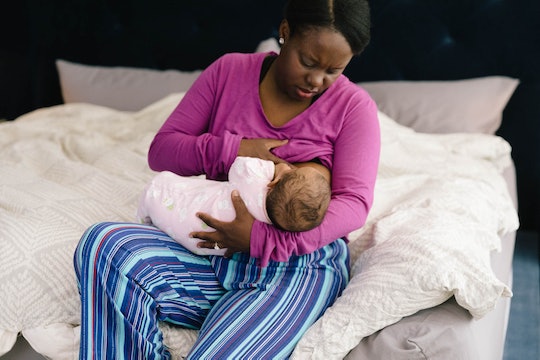 The instructor of my breastfeeding class repeated the phrase, "if breastfeeding hurts, you're doing it wrong," like a mantra. I thought if I learned how to achieve a "perfect latch," breastfeeding would feel good. When it didn't, I felt like a failure. I told the lactation consultant about my pain, and she said, "but, her latch looks good," as if that meant it couldn't be real. It was. I've since learned that breastfeeding pain is surprisingly common, caused by a variety of conditions, can be serious, and often can be treated. So, why aren't we taking breastfeeding pain seriously and can we please start, like right now?

As anyone who has breastfed can tell you that it's not always rainbows and sunshine. But, if for some reason you don't believe them, science totally backs them up. In a study published in the journal Pediatrics, 44 percent of new moms reported concerns about breastfeeding pain. Unsurprisingly, the people who reported pain were also much more likely to stop breastfeeding. Similarly, in a survey of over 13,000 breastfeeding moms conducted by Lansinoh, 21 percent said that not only was pain an issue, it was hardest part of breastfeeding.

Yet another study published in the International Journal of Environmental Research and Public Health reported that nipple pain was the main reason why new moms sought help from lactation consultants and quit breastfeeding entirely. They also found, though, that in many cases, pain was totally treatable. According to the study, pain during breastfeeding can be caused by latch issues, but also things like infections, flat or inverted nipples, and vasospasm. They add that 57 percent of moms in their study were able to get help for their pain by using a nipple shield, pumping to give their sore nipples a break, applying heat or cold, and/or using medications and creams.

Romper spoke via email with Neonatal Intensive Care Nurse and International Board Certified Lactation Consultant Jody Segrave-Daly, RN, MS, IBCLC, who has been helping moms cope with breastfeeding pain for over 25 years. She writes,

"Breastfeeding hurts, even if you have a perfect latch. It's time we inform mothers accurately because so many suffer in silence from excruciating nipple pain. Every book and lactation consultant will say breastfeeding doesn't hurt, and that is bullsh*t. It hurt for me, too. It's similar to being sensitive to sunburn when a mother has pale skin. She needs extra precaution to minimize sore nipples. After all, the number one reason why mothers stop nursing is from nipple pain."

In sum, not only is breastfeeding pain real, and common, but with the right help, we can freaking fix it, and without that help, we will probably stop breastfeeding. Which is under-freaking-standable. It makes me wonder, if one reason we dismiss breastfeeding pain, because as a culture, we tend to dismiss women's pain in general. As moms we are often told that we are supposed to enjoy every moment, and that we need to put our babies' needs before ours. This philosophy is not only incredibly unfair, it's really hurting moms.

I also think, though, that like my breastfeeding instructor, health care providers worry that if women think breastfeeding will be painful, they won't want to breastfeed. That is actually really condescending, when you think about all of the pain a pregnant, birthing, or new mom will experience on a near-constant basis. Moms are strong, y'all, and deserve accurate information about how to feed their babies. Also, no one should have to endure pain, if they don't want to, or can't bear it. A mom's mental and physical health are way more important than breastfeeding. Full stop.

United States health authorities have prioritized increasing breastfeeding rates, as part of initiatives like Health People 2020. Yet, the 60-page CDC Guide to Strategies to Support Breastfeeding Mothers and Babies that was created to help government agencies, providers, hospitals, and communities achieve those objectives doesn't mention the word pain a single time. Instead, their focus is on promoting programs like the Baby-Friendly Hospital Initiative's Ten Steps to Successful Breastfeeding, which encourages new moms to breastfeed right away after birth, but doesn't go on to suggest ways to prevent or treat pain after they leave the hospital. You know, when they need it.

Other breastfeeding resources that were recommended to me after my daughter was born, like La Leche League International, minimize breastfeeding pain as something you only have if there's a problem:

“Breastfeeding is a gift only you can give to your baby. It should be a pleasant experience for both of you. A healthy, full-term baby is likely to know instinctively what to do at the breast. In the first three to five days after birth, if you experience nipple soreness beyond a slight tenderness when your baby latches on, it may be a sign that something isn’t right with the baby’s latch, position, or suck.”

Another site I was encouraged to visit was the International Breastfeeding Centre in Toronto, Ontario. Their pediatrician, Dr. Jack Newman, MD acknowledges that breastfeeding pain exists, but again blames most pain on poor latch. To address these issues, he provides a detailed six-step guide to latching, which I can tell you from experience is pretty hard to follow, when you are trying to feed a hungry baby at 3 a.m. through excruciating pain. Newman also warns new moms to not use a nipple shield, claiming that they don't work and can hurt breastfeeding, even though a meta-analysis of research published in the journal Frontiers in Public health showed that using nipple shields generally doesn't interfere with breastfeeding, supply, or milk transfer and can help breastfeeding moms continue breastfeed longer.

Breastfeeding pain is real. It's not rare. Lying to women about it, minimizing what they are feeling, or withholding effective medical treatments is not OK at all. In hindsight, I view the dismissal of my pain, as a subtle form of gaslighting, designed to make me think it was all in my head, to force myself to "power through the pain," and to pretend everything was going well with breastfeeding.

With messages like these, It’s no wonder that pain comes as such a surprise to many new moms, and also that, like me, they don’t get help for their breastfeeding pain. This is not only sexist and cruel, but really counter-intuitive, if you actually want to, you know, support breastfeeding. I breastfed through cracked and bleeding nipples, breast infections, blisters, and open sores. I eventually got help, but only after weeks of pain, that my providers largely dismissed, and that I thought was my fault for, "doing it wrong." That's not OK. And according to Segrave-Daly, I am not alone. She writes,

"Pain medication is often necessary for healing, but unfortunately, they can mask nipple pain and once a mom is home she is aghast at her raw, oozing and bleeding, scabbed nipples. If you had bloody, scraped knees from an injury, would you be expected to crawl on your knees while healing? No. Your scraped knees are treated and covered until they heal."

Your breastfeeding pain is not only real, it may be a sign of something serious. Mayo Clinic notes that breast infections that cause pain like mastitis might require a prescription to heal, and can cause dangerous complications like abscesses, which need to be drained surgically, and should not be ignored. As Segrave-Daly told Romper, "I know of a mother who was pushed to nurse through three mastitis infections, developed an abscess, and she died recently from sepsis." She died. Let that sink in.

Mayo Clinc also reports that lingering breast pain can actually be a sign of breast cancer, and should be reported to your doctor right away. Once you understand the risks, it's easy to see how not taking breastfeeding pain seriously is hurting new moms.

The good news: breastfeeding support can look totally different when we take pain seriously, and treat it effectively, and moms are supported in meeting their nursing goals without pain. Segrave-Daly writes,

"A mother who is white knuckling and deep breathing upon a latch on, with tears rolling down her cheeks needs relief and a break from direct breastfeeding, not a latch adjustment. If a baby has a tongue tie, a mother should never be encouraged to continue breastfeed until after the revision. Doing so is beyond cruel. She needs to pump and bottle feed, until she heals."

Amazing. Her words made me legit cry a little. If only I could have heard something like that when I was in pain. If someone had taken me seriously. That's what real breastfeeding support looks like, recognizing that pain is a sign of a problem, and no one should have to power through or be told it's "not that bad." Also, that it's totally OK to not want to feel pain. It's not a necessary part of motherhood.

If you have breastfeeding pain, I see you. I believe you. I've been there. And I want you to learn a new mantra: "If breastfeeding hurts, you aren't alone. Help is available."