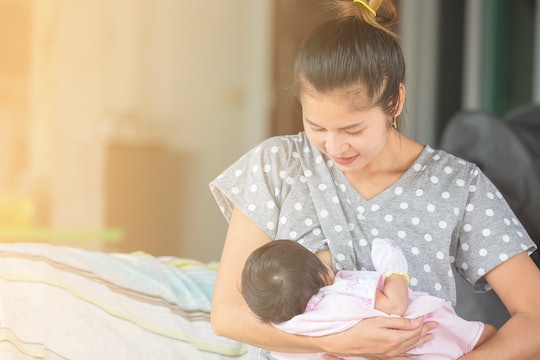 I always planned to breastfeed. I thought it was best for my baby, to be sure, but the pressure I felt to breastfeed — from other moms, my midwife, friends, and strangers — was intense, too. When things didn't work out as planned, I felt overwhelming and unrelenting guilt that interfered with my mental health, childbirth recovery, and even my ability to parent. Which, when you think about it, is pretty ironic, since I thought breastfeeding would make me a good mom. Looking back, I realize breastfeeding guilt is getting in the way of mothers parenting to the best of their ability. And the worst part of the whole thing? It's not our fault.

Guilt made me refuse to supplement feedings with formula, even when my baby got really sick and dehydrated. It also made me stay awake for hours on end, pumping and feeding her around the clock, which meant I was sleep-deprived when my baby was awake. Breastfeeding guilt made me obsessed with increasing my supply. So obsessed, in fact, that I spent money my family didn't have on lactation consultants and supplements. I actually spent more money trying to breastfeed than I did on formula in the first year. Yes, I am being serious.

The breastfeeding guilt didn't stop when my second child was born, either. It didn't stop after I was diagnosed with insufficient glandular tissue (IGT) and knew I wouldn't be able to breastfeed exclusively. Things were so hard on the breastfeeding front that I grew to hate the hours between 5:00 p.m. and 10:00 p.m., when my son wanted to breastfeed nonstop. I was pumping all day at work, breastfeeding all night, and even waking up early to power pump. It was exhausting and it changed the way I felt about my baby. I was so touched out, which made me feel guilty, too. It seems like the guilt associated with feeding your child is never-ending, and it can impact your parenting in a way that proves to be more negative than positive. Here's how:

More Like This
The 4 Main Parenting Styles & Which Is Best For Kids
How To Handle It When Someone Criticizes Your Parenting
If Your Kids Love Their Elf, You Don't *Have* To Put Him Away On Christmas
20 Ways To End Your Elf On The Shelf For Good