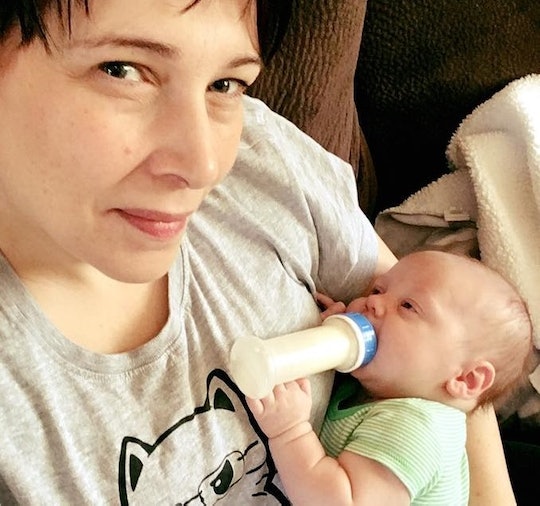 12 Reasons Why I Blamed Myself For Having Undersupply

In an effort to promote exclusive breastfeeding as the optimal way to feed babies, we seem to have forgotten that it's not always easy or even possible for some people to do it. Unfortunately, in our "breast is best" culture, we hear a lot about the benefits of exclusive breastfeeding, but little (or nothing) about what to do when it doesn't work out. As a result, I blamed myself and struggled with depression and self-hatred over what was and was not coming out of my breasts. Sadly, there were many reasons why I blamed myself for having undersupply.

It never occurred to me that I wouldn't be able to produce enough breast milk to feed my babies. Literally everything I read about breastfeeding said that undersupply was rare. Books, articles, classes and websites about breastfeeding cite statistics that seem so small (usually 1 percent or 5 percent), implying that those statistics mean that undersupply is "rare" and not likely to be something new moms have to worry about. It turns out that this figure is bullsh*t. I'm not joking. Seriously, there's no way to measure how many people will not be able to produce enough breast milk, because lactation is complex, requiring the right physiological conditions to exist (in both mom and baby), and can be impacted by so many things, including medical conditions, social pressures, previous trauma, support, mental health, sleep, time, nutrition, and hydration, just to name a few. Some experts estimate that 10 to 15 percent of women suffer from overt lactation failure, and as many as 40 to 60 percent of moms experience undersupply. However, if you think about it, even if it's true that only 1 percent of people who try to lactate have undersupply, that figure could represent millions of people.

We need to talk about undersupply, not just because it's a reality for so many people, but because the myth that it is rare and that almost anyone can breastfeed is really ableist, privileged, and anti-feminist. It can be really damaging and dangerous, causing moms to accidentally starve their newborns and seriously impacting their mental health. Above all, moms deserve to know that their ability as a mother is not measured in ounces of breast milk or the physical ability to lactate. It's just not. I don't blame myself for needing contacts, being short, or having rheumatoid arthritis, but for so many reasons I blamed myself for having undersupply. This has to stop.