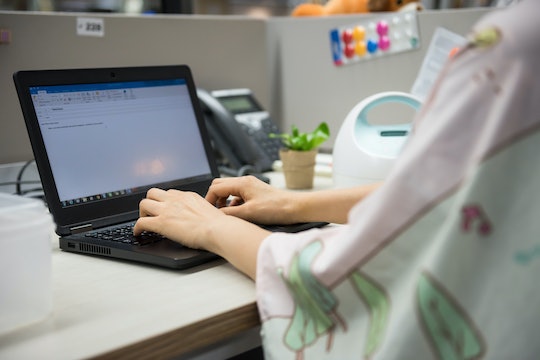 If You're A Working Mom Who Breastfeeds, It Could Affect Your Entire Career

The workplace is tough on women in general, and perhaps moms specifically. Every hour of every day, moms are making internal choices between this and that; their career and their kids. That's true even in the best case scenarios, when moms feel supported at work and have reliable care for their children. There are still so many micro choices you have to make on the regular that affect every level of your life. Take breastfeeding, as a big for instance. Even in the best workplaces, breastfeeding working moms can face long-term consequences that end up contributing to the gender pay gap in the long run.

Experts have said that motherhood is one of the leading causes of the gender pay gap, as reported by Vox in February. The report by Vox cited a study out of Princeton University which looked at the effect childbirth has on earnings for both men and women. Not surprisingly, the study found that having children caused a significant drop in earnings for women, but did not cause any drop in earnings for men. After a woman has her first child, the study found her income drops by about 20 percent over the course of her career.

Breastfeeding working moms seem to be especially harmed by the gender pay gap. As NPR producer Alexis Diao, who is the mother of two children, explained to Bloomberg, there is a culture of hostility and resentment around breastfeeding moms in the workplace:

There’s not a forgiving culture for new moms in the workplace. There is intense pressure to prove that you’re the same woman before childbirth and before pregnancy.

It would seem as though the workplace has been getting better for breastfeeding moms. In 2010 the federal government implemented the Break Time For Nursing Mothers law, which entitles women to basic accommodations in the workplace so they can pump breast milk for up to one year after they give birth, as noted by Womenshealth.gov:

These accommodations include time for women to express milk and a private space that is not a bathroom each time they need to pump. Learn more about what is required of employers and what employees need to know.

Unfortunately there still appear to be severe issues with women breastfeeding and going back to work. Sociologist Phyllis Rippey, who specializes in studying breastfeeding and women's earnings, told Bloomberg:

There's a real incompatibility in the U.S. with breastfeeding and continuing to work full-time. I call it the breastfeeding penalty.

Rippey's 2012 study found that women who breastfed for six months suffered from severe loss of earnings compared to women who breastfed for less time or not at all. It could all come down to the amount of time it takes to pump breast milk in a day, which some employers might continue to see as work time sacrificed in favor of breastfeeding. Even in workplaces with on-site lactation rooms, ACLU lawyer Galen Sherwin told Bloomberg there is still a stigma that breastfeeding working moms need too much special attention:

There is still a large problem with compliance. There’s this notion that women are seeking ‘special’ accommodations, as opposed to seeking conditions that make it possible for them to return to work when they have babies.

This stigma could very well stop women from trying to continue breastfeeding for the full first year as the American Academy of Pediatrics recommends. It is also damaging to a working mother's confidence, her sense of self, and her belief that she can have a successful career and be a mom at the same time.

We need to do better. Because it's hard enough trying to get through the day as a mother without feeling stigmatized for wanting to work and parent.