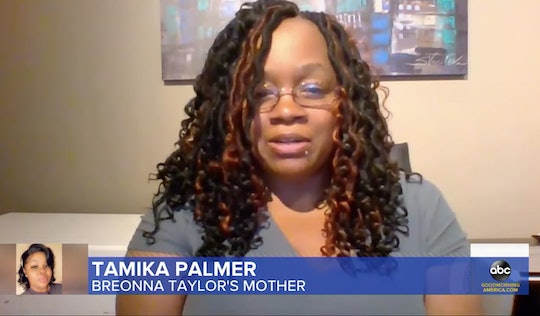 Her name is being chanted at Black Lives Matter protests all around the country, social media has been flooded with messages of love and support, and Breonna Taylor's mother, Tamika Palmer, has also paid tribute to her daughter on what would have been her daughter's 27th birthday on June 5.

"Breonna was full of life, she just loved life," Palmer told Good Morning America on Friday morning. "She would light up a room."

Taylor, a 26-year-old award-winning EMT, was shot and killed in her apartment on March 13 by Louisville, Kentucky police when they entered her home with a "no-knock" warrant as part of a narcotics investigation, according to CNN. After Taylor's boyfriend, Kenneth Walker, fired at the plainclothes officers with a gun he was licensed to carry, officers responded by firing more than 20 rounds of ammunition into the apartment, killing Taylor, according to the Washington Post.

Taylor's family has since filed a wrongful death lawsuit, according to CNN, and the FBI in Louisville opened the investigation in May. The three officers involved — Jonathan Mattingly, Brett Hankinson, and Myles Cosgrove — have reportedly been put on administrative leave as the investigation is carried out.

In the weeks since her death, people have come together to remember Breonna Taylor and honor her memory on her birthday, urging each other to create birthday cards to send to government officials in her honor to demand justice and simply remember her name.

"In that brief moment, where people forgot about her for two months at a time, people need to know that Breonna Taylor mattered, and Breonna Taylor was great," Palmer told Good Morning America.

In a press conference with Kentucky Gov. Andy Beshear on Monday, Palmer urged the importance of getting justice for her daughter, according to the Louisville Courier Journal. "I don't think I'm asking for too much, just justice for her," she said. "Just that people know the truth. What happened to her, that she didn't deserve this, just that people are fired for doing this to her."

Palmer told the Louisville Courier Journal in May that her daughter had planned on buying a house and dreamed of becoming a nurse. "Breonna had her head on straight, and she was a very decent person," she said. "She didn't deserve this. She wasn't that type of person."

As the protests demanding justice for Taylor and others who've been victims of systemic racism and police brutality continue into the weekend, there are many ways that you can help remember Taylor on her birthday and her help family fight for justice.