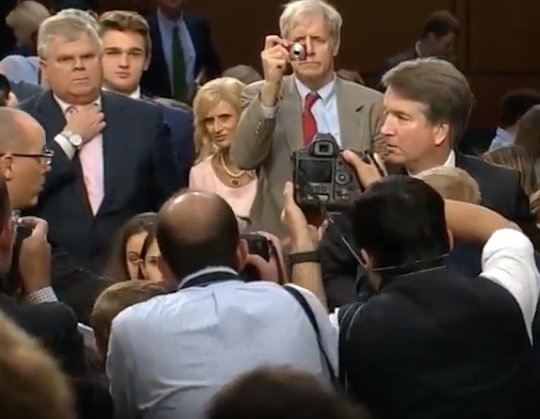 Jaime Guttenberg was just 14 years old when she was shot and killed by a lone gunman at Marjory Stoneman Douglas High School in Parkland, Florida earlier this year. Since that day, her father has made it his number one priority to continue working towards safer gun legislation and gun violence prevention in the country. Which is heartbreaking and justifiable and admirable all at the same time. And yet, President Donald Trump's SCOTUS nominee Brett Kavanaugh seemed to refuse to shake hands with Fred Guttenberg, the father of Jaime, one of the 17 victims of the Parkland school shooting.

Guttenberg has become an outspoken common sense gun policy advocate since losing his daughter, Jaime. As he told Marie Claire in a moving essay just two weeks after her death, "I am dedicating the rest of my life to fighting to end gun violence. People outside of the community should be paying attention. They should be reaching out. They should be calling their representatives to say, Do something. Support common-sense gun reforms. They should be going after companies that do business with the NRA—that lobby has our representatives tied up in knots, and we have to break that."

Guttenberg has kept that promise in the months since the tragic shooting. And to that end, the bereaved, determined father was present at the Senate confirmation hearing for SCOTUS nominee Brett Kavanaugh on Tuesday morning, according to The Guardian. As a guest of Democratic Sen. Dianne Feinstein, Guttenberg reportedly approached Kavanaugh, introduced himself, and was then snubbed.

"Just walked up to Judge Kavanaugh as morning session ended," Guttenberg shared on Twitter on Tuesday. "Put out my hand to introduce myself as Jaime Guttenberg's dad. He pulled his hand back, turned his back to me and walked away. I guess he did not want to deal with the reality of gun violence."

AP photojournalist Andrew Harnik appeared to capture the uncomfortable moment and shared it on Twitter.

Video of the interaction was also shared on Twitter:

While there will definitely be some people who will try to cast aspersions on Guttenberg's motives for wanting to speak to Kavanaugh (publicity stunt, etc), the truth is that's exactly what Guttenberg seems to want. To keep people focused on the issue of common sense gun reform. And when it comes to Kavanaugh — who President Trump nominated to replace Justice Anthony Kennedy, according to Business Insider — his stance on gun reform is one of great significance for the entire country.

Justice Kennedy was a swing vote for the Supreme Court, while Kavanaugh is considered a staunchly conservative judge who worked as White House counsel under former President George W. Bush, according to Vox. And the Republican party has been oddly reticent about sharing any documents with Democrats who are questioning Kavanaugh about his stance on gun reform, among other issues, according to CNN.

According to Quartz, Sen. Feinstein noted at the Senate confirmation hearing on Tuesday morning:

The president who nominated you has said he will nominate someone who is anti-choice and pro-gun. We cannot find the documents that absolve that conclusion…This is why we feel so strongly.

So when Kavanaugh fails to shake hands with the parent of a victim of gun violence, I think it's reasonable for people to be concerned about his thought process.

To be fair to Kavanaugh, White House deputy press secretary Raj Shah took to Twitter to explain that he did not shake hands with Guttenberg because he was an "unidentified individual" and security "intervened."

"As Judge Kavanaugh left for his lunch break, an unidentified individual approached him. Before the Judge was able to shake his hand, security had intervened," Shah tweeted on Tuesday.

Whether Kavanaugh knew who Guttenberg was and refused to shake hands with him based on his feelings about gun reform or not remains a little unclear. At the end of the day, however, Fred Guttenberg lost his 14-year-old daughter because of gun violence — he deserves to be heard.