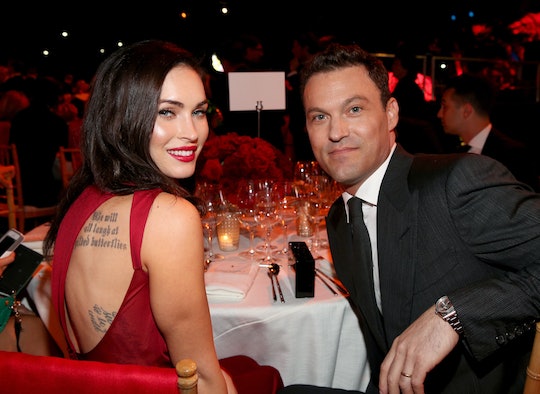 Actor Brian Austin Green has four sons, three of which he shares with actress and wife Megan Fox, and the couple frequently share pictures of their adorable family. Recently, however, Fox shared a shot on Instagram of her son wearing a Frozen dress, and a ridiculous number of people decided it was their place to shame the parents for flouting traditional gender norms. Asked about his reaction to the critics, though, Brian Austin Green defended his son's dress-wearing and shared a reminder that all of society could apparently use now and again.

While speaking with Hollywood Pipeline on Thursday, Green was asked if the comments on 4-year-old Noah's habit of wearing dresses bothered him and Fox. "My son, he's 4," Green responded with a shrug. "I've heard from some people that they don't agree, they don't agree with him wearing dresses. To them I say, you know, I don't care."

He's 4, and if he wants to wear it, then he wears it. Dresses or goggles or slippers, whatever. It's his life, they're not my clothes. ... At 4, at 5, that's a time when he should be having fun. He's not harming anyone, wearing a dress, so if he wants to wear a dress, awesome. Good on him.

I love Green's response not only because it's so casual, but because he highlights two important facts that critics often seem to forget when it comes to children and gender norms.

First of all, yes, it is Noah's life — so why should anyone but Noah dictate what he wants to wear? Frozen is a great movie, and the only reason dresses and princesses are only "meant for girls" is because society has told us that. In the late 1880s, boys wore white dresses and grew out their hair until they were 6 or 7 years old, and in the early 1990s, retailers recommended parents dress their sons in pink, "a more decided and stronger color" than blue, according to The Smithsonian.

Kids experiment, and no one assumes things about a young girl's gender identity or sexual orientation when she chooses football over ballet or pants over skirts. Yet when my brother wanted to come to ballet classes with me as a child, my mother said no, too scared of the backlash he'd receive from kids (and other parents) in a largely Catholic, conservative country. And judging by the horrible responses to Green's photo today, a good two decades later, I understand that fear.

The second fact that deserves highlighting in Green's response? Green said, "He's not harming anyone, wearing a dress." That's a reminder that the United States (and a large number of countries) seems to need, since flouting traditional gender stereotypes is often perceived as a cover-up for something predatory and harmful.

States and schools routinely ban transgender individuals from using bathrooms that match their gender identity, using the excuse that they must protect little girls and women. But protect them from what, exactly? There's zero existing evidence of violence associated with allowing individuals to use bathrooms that match their gender identity. (Meanwhile, sexual orientation continues to rank as the third-highest motivator for hate crimes in the United States, according to the Human Rights Campaign.)

There's nothing wrong or harmful with a boy wearing a Frozen dress or donning a wig or attending ballet class. Experts routinely state that allowing a little boy to act in stereotypically feminine ways will not affect his sexual orientation or gender identity, both of which most experts agree are biologically set, anyway. And if Green and Fox — and more importantly, their son — aren't bothered by it, then why should anyone else care what Noah wears?