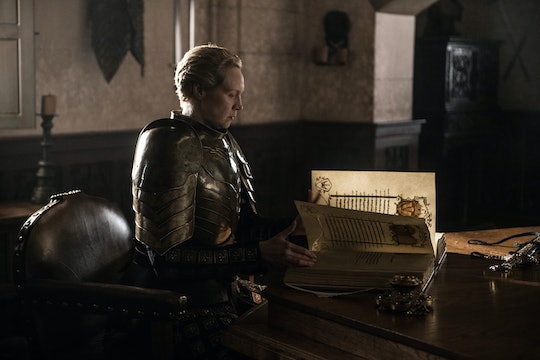 Of all the characters on Game of Thrones who started off in supporting roles, Brienne definitely took all of the right steps along the way to get her to the right place by the end of the series. She went from almost being laughed out of a tournament in front of Renly Baratheon to Lord Commander of the Kingsguard. In the finale, she honorably corrected the mistakes in Jaime’s entry in the The Book of Brothers and now, the Brienne writing memes from Game of Thrones will give you a reason to smile even though the show is over for good. That’s not to say the show didn't end on some high notes, because all of the Stark children got their own happy endings, but the finale didn't come without some bloodshed. And at this point, anything that will lighten the mood a little is definitely welcome for fans.

One of Brienne’s final scenes of the Game of Thrones finale showed her filling in Jaime’s page in the book that details every knight’s accomplishments. At first, viewers couldn't see what she wrote, but then there were some shots of the book itself. Brienne wrote about Jaime joining the northerners in Winterfell, his role in fighting the army of the dead, and the fact that he died protecting his queen. Despite Jaime breaking her heart, Brienne still paid homage to him in the best way she could. And even though it was a sweet and somber moment, Game of Thrones fans have much funnier versions of what she wrote in the book.

Brienne writing in The Book of Brothers is a lot more meaningful than just doing right by Jaime in his death. Back in Season 4, Joffrey sarcastically asked Jaime where all of his accomplishments were in the book, as his entry was less than a page long and other more notable knights had multiple pages dedicated to them. At the time, all Jaime could do was agree with his king that his own page was lacking, but it clearly bothered him.

Later that same season, Jaime visited the book again to scowl at his short entry and, very likely, wish that he had spent more of his life fighting for justice and less time being a spoiled Lannister. As someone from a great house, however, Jaime acted like an entitled child up until he lost his hand and started to change for the better.

He really showed his nobility in the final two seasons of Game of Thrones when he went against Cersei to ride north to Winterfell and help the fight against the dead. He went against his queen and the only woman he had ever loved and it was a big moment for him. I’m sure that Brienne’s entire entry in the book rightfully praised him. I just also love all of the Brienne writing memes that paint a much more colorful picture of what she wrote.

It makes sense that it was Brienne who righted the wrong of leaving Jaime’s book entry bare of his accomplishments later in life. Other than Cersei, Brienne loved him and if he hadn’t gone back to Cersei, they might have stayed together. Unfortunately, Brienne lost Jaime as quickly as she got him. Clearly there are no hard feelings, though, as she honored him in his death.

Even though Game of Thrones is over and it’s unclear when any of the spin-off series will really start to take shape, most of the main characters’ stories ended the way they should have. Jaime died in the arms of the woman he loved, like he always wanted, and Brienne was given the top honor as a knight. And although Jaime isn't alive to see his own accolades in The Book of Brothers, Brienne’s words will honor him in his death.