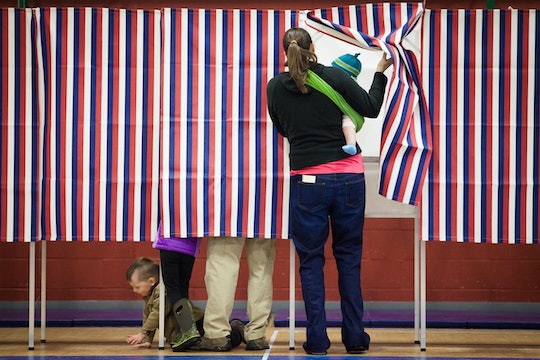 Early voting is underway in Texas, where I now live. So every day, for the past week, I've witnessed long lines of hopeful voters wrapping around the strip mall block of my local polling place. And among those voters have been children of all ages accompanying their parents to the polls. I have yet to cast my vote, but I know I will be one of those parent voters with their toddler by their side. And you're also bringing your kid to vote with you, here's everything you need to know as a parent before Election Day, Nov. 6.

There are two main reasons why I am taking my son with me to the polls. The first reason: I don't have anyone to watch him, and he's not in daycare at the moment. The second — and more meaningful — reason: I want him involved in the voting process. He is only 3 years old, so he doesn't understanding what's happening. But I do firmly believe that he will remember the experience in some way, and I want him to know, from an early age, that one of the greatest powers we have as citizens is the right to vote.

But before you or I head to the polls, there are a few rules and tips you should keep in mind.

What Are The State Requirements?

Every state in the country allows parents to bring their minor children under the age of 18 with them into the voting booth. Every. Single. State. That means your teen, your middle schooler, your toddler or your infant can be by your side while you cast your vote. So if a poll worker turns you and your child away, remind them of their state's laws not only dictating voting booth rules, but also voter suppression.

Are There Any Age Limits?

Although every state allows kids under the age of 18 to accompany their parents in the voting booth, some states have stricter age limits. In Virginia, for example, only children 15 years old and younger are allowed in the booths, according to NBC News. Same goes for Connecticut.

How Many Children Can You Bring In The Voting Booth?

State rules vary, but generally, parents can only bring one or two kids under the age of 18 with them in the voting booth, according to The Stir. (Pennsylvania only allows one child, for example, while Maryland allows up to two, according to NBC News.)

Make sure to check your local ordinances before heading to the polls. If you have more than two minor children, and unable to hire a babysitter, plan to head to the polls with a friend who is willing and able to bring on your kids into the voting booth with them. Or you can put together a parent's group for voting day, and work as a community to provide childcare and exercise your civic duty.

Can Your Child Cast Your Vote On Your Behalf?

Yes! Once you have made your choices for elected officials and local ballot measures, your kid can cast your vote for you by pushing the button or pulling the lever, according to What To Expect. This is a great way to not only get your child involved in the voting process, but give them a hands-on understanding of what it means to vote.

What About Rules Around Behavior?

You will be asked to leave if your child is disruptive during the voting process. So come up with a plan to keep your kids entertained on line and in the voting booth. Play a game of I SPY or have them working on their counting skills. Also, have plenty of snacks on hand. If you have an infant or toddler, make sure that they're well-rested, burned off excess energy, and have full bellies before heading to the polls. This way, they are less likely to be cranky and disruptive.

When Should You Head To The Polls?

Peak voting hours are before 9 a.m., during lunchtime, and after 5 p.m. So if you're bringing your children with you to vote, try to head to your local polling place during off-peak hours — say, around 10 a.m. or 3 p.m. — to avoid crowds. Lines should be shorter around those times, and there should be less noise to distract your children.

Voting is crucial to upholding democracy, and our children should be involved as much as possible in that process. So it's important to be prepared if you are taking them with you to the polls.