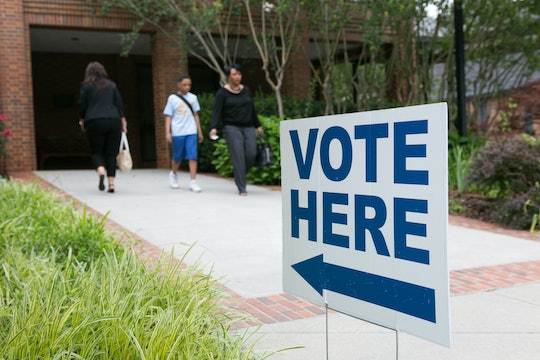 How The Voter Purge Could Affect You

Ahead of the 2016 Presidential Election in November, President Trump argued that, if he were to lose to then-Democratic Presidential Candidate Hillary Clinton, it would be for one specific reason: voter fraud. At the time, the claim seemed like a convenient way for him to save face, but by the time he actually won, Trump's complaints about supposed voter fraud in America had taken root as a serious issue among Republican voters. Now, the Trump-assembled Advisory Commission on Election Integrity is set to meet on Wednesday for the first time, according to The New York Times, and it has many people concerned. What is the voter purge? Though the goal of the commission is supposed to be ensuring the validity of voter registration in an effort to crack down on voter fraud, critics argue that the outcome will primarily be greater voter suppression — particularly against minorities.

On social media, much of the reaction over the news of a potential GOP-led voter purge has been positive, especially among right-wing Twitter users who believe that Democrats were casting fraudulent votes on behalf of still-registered dead citizens, or that people who weren't actually legally able to vote in the election were voting Democrat. In fact, according to The Independent, Trump has previously claimed himself that voter fraud was actually the reason why he lost the popular vote, where Clinton actually beat him by more than three million votes.

In May, Trump announced the creation of commission, according to The Independent, which and that it would be led by Vice President Mike Pence and Kansas Secretary of State Kris Kobach. The move seems to be a direct follow-up to tweets the president sent out only days after his inauguration, in which he said he would "be asking for a major investigation into VOTER FRAUD," despite the fact that numerous experts subsequently insisted that, actually, there's no real evidence to suggest that voter fraud in America is even a problem.

The commission's first action towards encouraging "electoral integrity" began last month, according to The New York Times, when it requested that each state hand over voters’ personal data. That data included, among other information, full names, addresses, dates of birth, political parties, last-four digits of Social Security numbers, and individual voting history beginning in 2006, according to Vanity Fair, presumably meant to be added into a federal database of sorts. The commission also reported requested information from 44 states pertaining to their voter roles and how they are maintained — a move The New York Times called "unprecedented."

For Republicans sincerely concerned about dead voters or about people casting multiple votes in different districts or under different names, the idea of a central database of voter information might sound appealing. Anything that will help keep fraudulent voters from slipping through the cracks, right? But the reality is likely to be much different from how it might sound.

One reason? There are various scenarios where voter information might be flagged that has absolutely nothing to do with fraud. According to Vanity Fair, many people registered to vote legitimately happen to have the same names and birth dates — and the likelihood of that is more common among PoC. It's also not uncommon for individuals to be registered to vote in two states (multiple members of Trump's team actually are) or to have duplicate voting records, but that doesn't necessarily mean any of them have actually voted twice or pose any threat to electoral fraud.

Streamlining voter records for accuracy and efficiency actually seems like it really would contribute to a stronger electoral system — and who wouldn't want that? But in states where similar voter purging occurred, the result were concerning to say the least. According to WNYC, about 120,000 voters in Brooklyn found they'd been purged from the voter rolls in April of 2016, leading Mayor Bill de Blasio to call for an investigation. But a deeper look at who was actually cut from the list suggests that minorities were disproportionately affected. WNYC found that,

And it's not just Brooklyn. In Kansas, Kobach — now leading Trump's election-integrity commission — was sued multiple times after he allegedly illegally blocked "tens of thousands of voters from registering" before the 2016 election, according to The New York Times. Kobach was eventually forced by a federal judge to let previously-blocked voters cast ballots, according to The Kansas City Star. And in September 2016, Kobach and the American Civil Liberties Union reached and agreement that cancelled a planned hearing against him.

In addition to purging voter registration lists in the name of accuracy, the GOP has pushed for stricter rules surrounding the voting process itself. Though laws vary state-to-state, research has shown that the GOP-led push for voter ID laws in many states has also had a particularly negative effect on minorities, and that, according to CityLab, "for Latinos, Blacks, and multi-racial Americans there are strong signs that strict photo identification laws decrease [voter] turnout.”

As much as many Republican politicians — and certainly the president — appear to be framing this development as a positive once meant to protect the integrity of the electoral system, it seems that, whether they intend for it to or not, voter purges can actually weaken the public's trust, and can unfairly discriminate against people's legal rights, all while continuing to perpetuate a claim about voter fraud that still has yet to be backed up by actual evidence.

And at a time when there seem to also be so many other incredibly concerning issues facing the president and his administration, Trump's election-integrity commission certainly doesn't appear to be a development Americans should feel particularly optimistic about.

More Like This
'The Princess Diaries 3' Is Actually, Really Happening
Meghan Markle Spent Her Thanksgiving Volunteering For A Cause Close To Her Heart
Over 10,000 Sippy Cups & Bottles For Toddlers Recalled Due To Lead Poisoning Hazard
14 Baby Names Inspired By 'The White Lotus' That Deserve A Round Of Aperol Spritzes