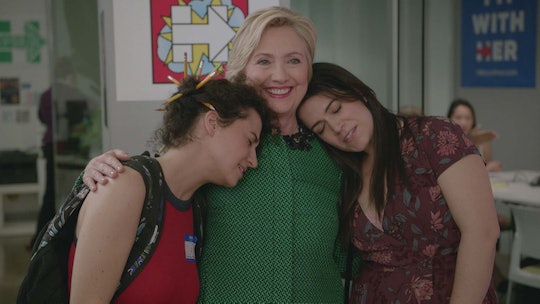 After a 17-month wait, the fourth season of Broad City is finally here! The new season marks the return of best friends Abbi Abrams and Ilana Wexler as they continue to try to make their way through the wild world that is New York City. Just like the previous seasons, Season 4 will bring more hook-ups, more laughs, and more guest stars. However, the Broad City Season 4 guest stars may just be the best yet, which is saying a lot since the show has done very well with guest stars in the past.

Last season, the popular series was even graced by Hillary Clinton's presence while she was campaigning for the presidency. Season 3 also featured Tracee Ellis Ross, Adam Levine, Whoopi Goldberg, Blake Griffin, and Vanessa Williams. Prior to Season 3, Broad City has also been graced with appearances by the show's producer, Amy Poehler, as well as Fred Armisen, Patricia Clarkson, Alia Shawkat, Seth Rogen, and Rachel Dratch. The show has also had a number of Upright Citizens Brigade performers on the show, which isn't surprising since Poehler is one of the founders of the group and theatre.

It's clear Broad City isn't afraid to bring out some of the best of the best in entertainment and Season 4 will obviously be no different. Here are all the stars you can look forward to seeing this season.

Based on the trailer, it appears Ilana may be getting a new job working for RuPaul in a restaurant. Knowing Ilana, this gig won't last long.

At Comedy Central's Clusterfest, show creators Abbi Jacobson and Ilana Glazer revealed the Saturday Night Live alum, along with many other stars, would be guest starring in Season 4.

The former Nanny will be returning to NYC this season.

The Emmy-winning comedian will surely bring the laughs in her guest-starring role.

Essman is returning to reprise her role as Ilana's mom, Bobbi.

You may remember Lowery from her role as Grandma Jenkins on the '90s sitcom, Ghostwriter, but in Broad City, she'll be the sex therapist who helps Ilana take back control of her sexuality after she finds herself unable to orgasm since Nov. 8, also known as Election Day.

The Grammy-winning country singer will make an appearance at Soulstice, Abbi's former place of employment.

Based on this incredible list of guest stars, it's clear Broad City Season 4 will totally be worth the wait.