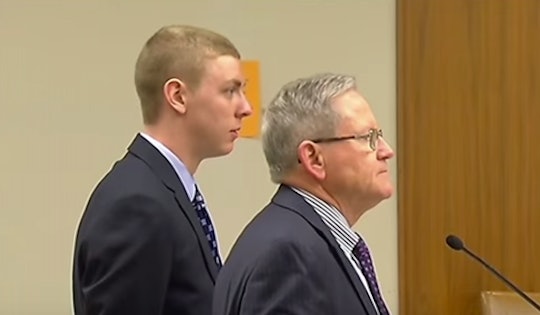 I'm not a parent, and I make it a habit to not judge parenting choices. In fact, whenever any inkling of parental judgment presents itself, I constantly remind myself that I have no idea what it's like to raise, and be responsible for, a human being. Furthermore, I would never want to imagine what it must feel like to learn about horrible things my child has done. I can imagine it's an indescribable pain. But Brock Turner's parents missed this crucial opportunity to acknowledge that their son is not the victim, and it's crucial that fellow parents (and people, generally) point it out. Instead of returning to the lesson most kids are taught from a young age — to say you're sorry and admit to exactly what you did wrong — Turner's father publicly perpetuated and epitomized rape culture, and that's something that can't be ignored.

Turner's 23-year-old victim wrote a moving and heartbreaking 12-page letter detailing the night she was raped by Turner. She described what it was like to endure the trial that followed the horrific assault, where she was interrogated, silenced, and discredited by Turner's defense team. She recounted the day she learned the details of what happened to her when Turner raped her while she was unconscious in January 2015:

I was found unconscious, with my hair disheveled, long necklace wrapped around my neck, bra pulled out of my dress, dress pulled off over my shoulders and pulled up above my waist, that I was butt naked all the way down to my boots, legs spread apart, and had been penetrated by a foreign object by someone I did not recognize.

Turner was convicted on three felony counts of sex abuse charges and sentenced to six months in jail – though his sentence could be reduced to three months with good behavior.

Throughout her letter, Turner's rape victim described how his violent assault has impacted her:

My independence, natural joy, gentleness, and steady lifestyle I had been enjoying became distorted beyond recognition. I became closed off, angry, self-deprecating, tired, irritable, empty. The isolation at times was unbearable. You cannot give me back the life I had before that night either.

Turner's dad's response? His son's sentencing is "a steep price to pay for 20 minutes of action out of his 20 plus years of life."

A clear misguided attempt to cast his son as a victim, and a shameful missed opportunity to do the right thing: acknowledge his son was absolutely, unequivocally, wrong. Turner's father could have led by example and admitted that his son's actions were not only wrong — they were violent and they should serve as an example of what not to do, ever.

Turner's dad, Dan Turner, instead wrote a letter to the presiding judge, Judge Aaron Persky, addressing how the case has negatively affected his son; for example, his son can no longer enjoy ribeye steaks or snacks like pretzels and chips. Dan Turner highlighted his son's "easy going personality," and "welcoming smile," and his swimming career and aspirations. But not once did Dan Turner mention the irreversible harm his son's actions have caused the victim. Instead, his son became the victim – having to register as a sex offender, all because of "alcohol consumption and sexual promiscuity." Wrong. He's a rapist and criminal. And his sentencing was lenient and inconsistent with the deplorable crime he committed.

Dan Turner's letter was joined by other letters of support for Turner from relatives and friends, urging the judge to keep him out of jail, entirely. The letters all seem to share one thing in common: sympathy for Turner, none for his victim, the rape survivor. Turner's grandparents even expressed that Turner is "the only person being held accountable for the actions of other irresponsible adults." But what does this say about rape culture? A man found guilty (with eyewitness accounts) to three counts of sexual abuse is paying a "steep price" with a six-month jail sentence. No one can deny Turner's parents to, naturally, unconditionally love and support their son. But to publicly assert him a victim, to not issue any apology or admittance of guilt, and to not publicly condemn his actions, or rape culture as a whole, only deepens the impact of Turner's assault.