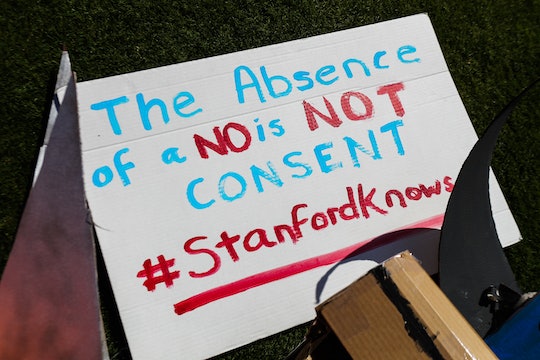 We've heard about this young woman before. She was there the night Brock Turner raped an unconscious woman by a dumpster outside a frat party at Stanford University. She was not a witness, but she was invested. Because that unconscious woman was her older sister. And she had been the one to coax her into joining the party that fateful night that changed so many people's lives. Her own included. The sister of Brock Turner's victim penned an impact letter to Turner, and her words are truly heartbreaking.

More Like This
Wait, Did The Government Actually Do Something For Parents?
Bindi Irwin Has Been Sharing The Cutest Photos Of Her Daughter
The Bates Family Keeps On Growing: Get To Know All 19 Kids Here
Lisa Kudrow’s Son Used To Say "Mommy!" When He Saw Jennifer Aniston On TV

Brock Turner was found guilty of three felony counts of sexual assault by a jury. For these crimes, he has been sentenced to just six months in jail. He will most likely only spend three months in jail, according to the Independent, which is one month for every act of sexual assault. Santa Clara County Superior Court Judge Aaron Persky felt that the sentence fit the crime based on letters from Turner's friends and family, as well as his young age.

Perhaps he should have given more credence to the two victim impact letters we have seen so far. The now-famous 12-page letter the victim read aloud to Turner, and this letter from her younger sister.

Here is an excerpt from that letter.

My message to Brock Turner is that the damage you inflicted is irreversible. What has affected me most is that you did something to someone I love that I cannot take back. In this last year and a half, I have experienced some of the lowest points of my entire life; I have felt more sadness, guilt, and anger than I have ever felt. But I would go through what I’ve suffered a million times over if it meant that I could take away what you did to my sister. I can’t undo your mistakes and I can’t mend the part of her that you took away, even though she’s dedicated her life to mending me when I need her.

Those moments that you assaulted her were just the beginning; you took her down with you because you failed. When I read the comments about how it was just 'two drunk kids who made a mistake,' I feel such intense hopelessness that there will always be people like you, who believe alcohol can dismiss perverted, harmful, sickening actions. You saw a drunk girl alone, incapacitated why would you not try to find her friends? I was trying to find her. Where has your remorse been? Really, truly: do you feel guilty because you were sexually assaulting her, or because you were caught?

CNN managed to obtain this letter as well as other court documents. According to these documents, the victim's sister had already rebuffed Turner twice on the night of the assault before he decided to go after her intoxicated sister. The sister referred to him as "aggressive," according to CNN, and testified that he had tried to kiss her. The prosecution noted that "This behavior is not typical assaultive behavior that you find on campus, but it is more akin to a predator who is searching for prey."

Unfortunately for the victim and her sister, he found his prey.

But the woman he chose as his prey seems to be a survivor. If you haven't read her letter (which was released by BuzzFeed), please do. For now, here is a tiny excerpt.

I was not only told that I was assaulted, I was told that because I couldn’t remember, I technically could not prove it was unwanted. And that distorted me, damaged me, almost broke me. It is the saddest type of confusion to be told I was assaulted and nearly raped, blatantly out in the open, but we don’t know if it counts as assault yet. I had to fight for an entire year to make it clear that there was something wrong with this situation.

I think the victim's sister said it best in her closing remarks to Brock Turner in her letter.

“The only sorrow I feel for you is that you never got to know my sister before you assaulted her. She’s the most wonderful person in the world."