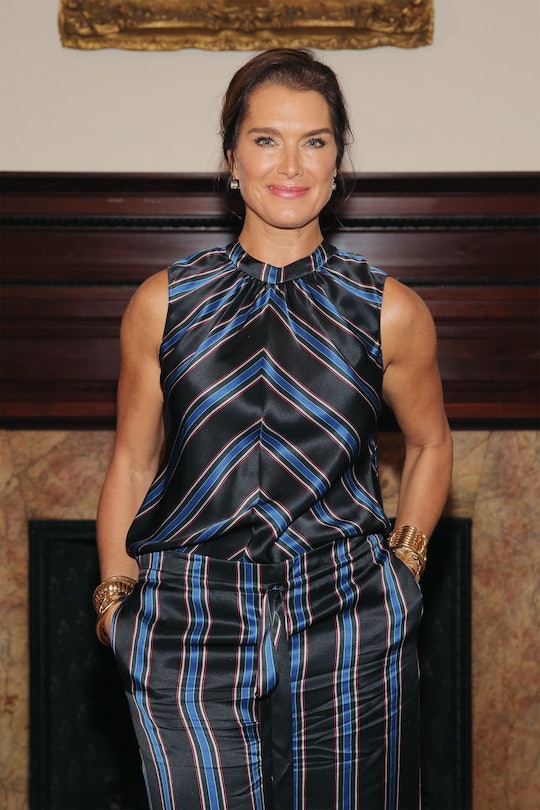 Conversations about perinatal mood and anxiety disorders (PMADs) have been increasing in the last few years, particularly as more and more women have become increasingly vocal about the disorders that so many new women can struggle with. Brooke Shields, who struggled with postpartum depression, talked about her experience with PMADs on the Strahan And Sara show today, becoming emotional as she reflected on her experience. Her poignant reaction emphasized the lasting impact perinatal mood and anxiety disorders (PMADs) can have on women long after they give birth.

Shields has long been an advocate for increased attention on postpartum depression, using her platform to speak on the topic since she released her memoir Down Came the Rain: My Journey Through Postpartum Depression in 2006. The book instantly became a bestseller, and Shields is credited as one of the first prominent public figures to address postpartum depression in a serious manor. Part of the book's success came from its honesty, as few in the medical or public community were talking about PMADs, which unfortunately still proves true today. Over half of women who suffer from perinatal depression go undiagnosed according to the findings published in a January 2019 Pediatrics study, largely as a result of stigmas around the mental health condition.

However, since Shields' book came out, there has been increased conversation in the public sphere about PMADs, and Sara Haines of the Strahan And Sara show sat down to talk to the author about her experience and how things have changed since the birth of her two children. Haines herself experienced postpartum depression after the birth of her first child, and both Haines and Shields got emotional as the looked back on their mental health following childbirth.

"I wanted to thank you," Haines told Shields, commending her for being one of the first women she saw in media talk about her experience with pregnancy and childbirth in a way she connected with. "I'm grateful for pioneers like you that were strong enough to say when no one else was saying, you're not alone." The moment highlighted how isolating PMADs can be for sufferers, particularly because women who suffer from it blame themselves.

"When I experienced it, it was devastating," Shields said, especially because she didn't know what it was. The lack of attention placed on PMADs when women are pregnant is problematic in and of itself, as research shows women at high risk of developing perinatal depression who receive counseling are 39 percent less likely to actually become depressed, per the preventative services task force. Fear of being judged by others often prevents women from speaking up, when in actuality the sooner you address even the possibility of PMADs, the better the odds are you won't have to struggle with it.

Shields spoke on the difficulty of seeing other women who seem completely thrilled and at ease with motherhood from the get-go, and the shame she felt for not having the same response after she gave birth. It's "that world where you look at other people...and you're like I don't feel like that," which led her believe there was something wrong with her emotional response. But the reality of PMADs are that they are conditions you can't control, and the shame is based on a social construct. "There's a lot of stigma, still, surrounding postpartum," as Shields pointed out.

Treatment for PMADs starts with awareness, and dismantling the negative views people have women who experience them is the first step.

You can see Shields and Haines full conversation on “Strahan and Sara,” which airs 1 p.m. ET and 12 p.m. CT/PT on ABC.