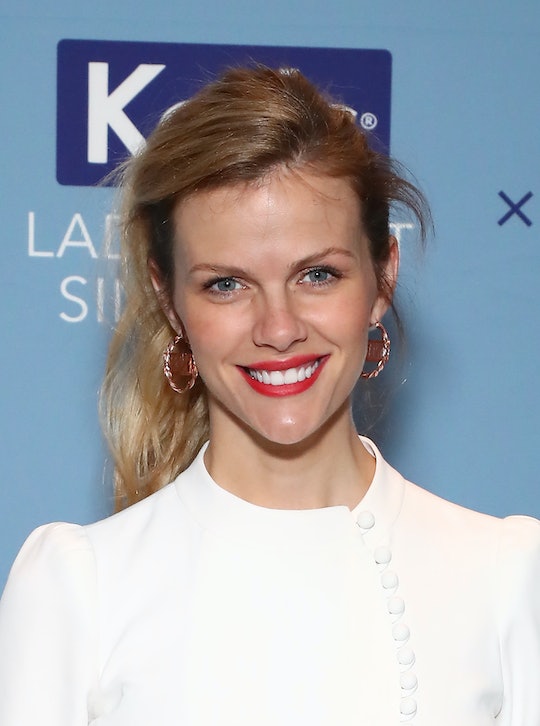 It sounds like congratulations are in order, folks! On Wednesday, the world learned that Brooklyn Decker welcomed her second child with husband Andy Roddick back in November, according to Us Weekly. The 30-year-old model and actress shared a cute selfie with her newborn on Instagram on Wednesday morning, along with the (ahem, very relatable) caption, "A newborn, a toddler, a dog in a cone, a dog with a tumor but I’m having a good hair day so it’s fine we’re fine I’m fine."

The newest addition to their family is a baby girl named Stevie (a name whose popularity has gone up in recent years, according to Baby Center). She joins older brother Hank, who was born in September 2015. The couple welcomed both children in Austin, Texas, according to Us Weekly.

Roddick, a former tennis pro, first announced that he and Decker were expecting their second child back in July, at a ceremony for the International Tennis Hall of Fame Class of 2017, according to People. Thanking Decker, Roddick said:

You’re the reason why my personal transition into a quasi-normal, everyday life has been gratifying and full. Hank will someday realize how lucky he is. Our daughter that’s coming will also realize she has the best mother on earth. Simply, thank you for being you.

Since Roddick shared the news, however, Decker has also been very open with fans about her second pregnancy — from posting pictures of her swollen ankles on Instagram to describing 2-year-old Hank's limited understanding of what was going on. "Hank’s main concern is how the 'baby is going to climb out of the tunnel,'" Decker told People in September. "Sounds pleasant, right?"

Now that Decker's little family has welcomed Stevie into their ranks, it's clear that the mom has got her hands full — but the Grace and Frankie actress has made it clear in the past that she loves the madness. In September, she also told People:

I find that the more I have to do, the better I am at the things I do. When I have a lot to work on with the UI/UX of our site and lines to memorize for Grace and Frankie and my family needs me, that [is when] I operate on all cylinders and am my most efficient. It is when I’m not challenged on time that I get a little cuckoo.

Decker and Roddick may have taken their time to announce the birth of little Stevie, but some enterprising fans started suspecting that Decker had given birth after they noticed what seemed to be a breast milk stain in a picture Decker posted on Instagram back in December. "So you had the baby!!?" one Instagram user commented on the picture, while others commiserated with the breast milk stains that breastfeeding can bring. At that point in time, however, Decker didn't confirm (or deny) the arrival of Baby No. 2.

With little Stevie's birth confirmed, though, it sounds like we can all look forward to more honest and hilarious parenting posts from Decker, who never seems too afraid to post the good, the bad, and the ugly sides of being a mom. Congratulations to the happy family on their fourth member!

More Like This
Rihanna & A$AP Rocky’s Baby Is Here!
'Hocus Pocus 2' Officially Has A Release Date To Look Forward To
Ed Sheeran Just Revealed He's A Dad Of Two With The Sweetest Instagram Announcement
Quinta Brunson Is Giving Back To The School That Helped Inspire Abbott Elementary