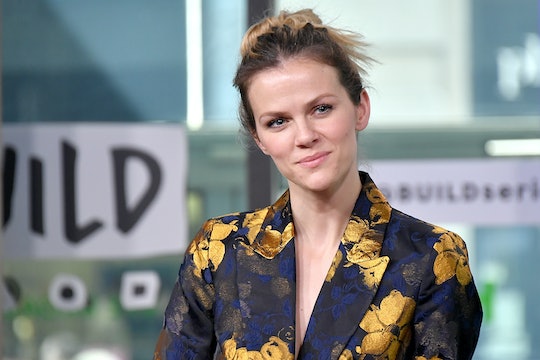 Have you ever seen another parent experience something you've been through yourself, and your heart just drops for them? Because man, this business of raising tiny human beings can be complicated! For example, Brooklyn Decker’s worried mom moment after dropping her daughter at preschool for the first time is all too relatable.

As USA Today reported, the actress and star of TV's Grace and Frankie found herself having what my kid's teacher calls "BIG feelings" over the fact that, actually, things were going just right.

See, Decker's two kids had gotten ready and were finally both going to school for the day, with 17-month-old daughter Stevie adorably toting her very own backpack for her first encounter at preschool.

This is a HUGE milestone, right? No, not for little Stevie... for mama Decker, guys. The real person to worry about is never your child, who one second after you leave is fully immersed in the wonders of Play-Doh.

I wasn't there, but trust me, this is almost certainly what happened, based on Decker's social media. Decker and husband Andy Roddick, as People confirmed, took both kids in the car, Stevie joining older brother Hank, 3 1/2, by delving into the ABC's and 1-2-3's while learning to socialize with other kids.

As we infer it, when the Austin, TX.-based family (so says real-estate website Mansion Global which tracked the sale of their $6 million spread for a new home last year) arrived at preschool, little Stevie went into class and, just for a second, looked unsure, before toddling off to explore and have fun.

Everything was fine until Decker got back in the car and started going over it. (Never do this, Brooklyn.) "Are we bad parents for just sending her off?" she asked Roddick, before starting to cry. "I left her to fend for herself... toddlers surrounded her!"

This sad, but slightly comical moment — in which you can tell that Decker knows she is being ridiculous but can't help it, and in which Roddick helps talk her off the ledge by reminding her they are doing exactly what good parents do by letting their kids explore the world — has taken place since time (and preschool) began.

I remember having this exact conversation the day my oldest started preschool (she's in middle school now, one of the moms who shared my tears that day just texted to ask how my kid is handling final-exam stress... so, fair warning: it never ends).

"I cried. Not as much this time. Two babies in baby school. 😭," Decker wrote on Instagram as a follow-up to the clip, to which fans including Jessie James Decker (not related, I believe) empathized. "Omg i still do this and they’ve been in school 2 years," the fellow celeb mom wrote.

I hope Decker, who has also launched an app to help women organize their wardrobes, will know she's not alone from the support online and from fellow moms.

I think it's interesting that the mom half of a parenting duo seems more prone to self-doubt than the dad half, as you can see in Decker's case. What's that about? Being a mother is the most important job on earth. Anyone doing a half-decent job at it should be shouting it to the mountaintops, right?