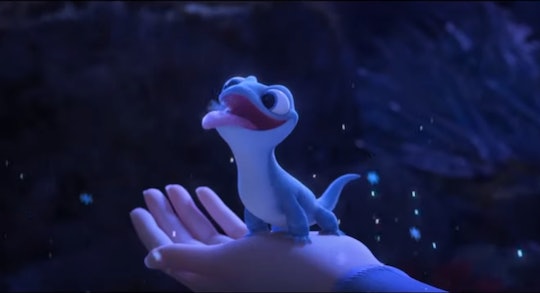 I'm Calling It: Bruni From 'Frozen 2' Will Be Your Kid's Newest Obsession

There are several important hallmarks of a great animated film from Disney. The songs, of course, and a compelling main character who will spawn Halloween costumes for years to come. And a really cute animal sidekick. No big surprise here, Frozen 2 looks like it has all of these elements in spades. Great music, great future Halloween costumes, and the salamander from Frozen 2 named Bruni, who's so dang adorable, every kid will want a stuffed animal that looks just like the tiny reptile.

Fans are just days away from finally being able to catch Frozen 2 in theaters. The massively anticipated film featuring more adventures in the fairytale land of Arendelle from royal sisters Anna and Elsa is set to come out on Friday, Nov. 22, to the delight of kids everywhere. There is one element of the new film that should get kids extra excited: an adorable new character named Bruni.

Which means he might eat from her hand and this is probably every child's dream come true, right?

Bruni is already something of a social media favorite before the movie has even be released, so I think parents can expect to see their kids asking for Bruni merchandise as soon as the movie has officially premiered. Fear not, though, there are already several Bruni items for sale on sites like Amazon including a mood night light that changes color from blue to purple for $24.99. The Disney Store also has a very adorable mini bean bag plush of Bruni for just $11.95 that looks to be the perfect size to fit in the pocket of a little one.

While Bruni's role in Frozen 2 is still something of a mystery, one thing is certain. Kids are going to fall in love with his cute little face. And parents are going to want to get a jump on all things Bruni.