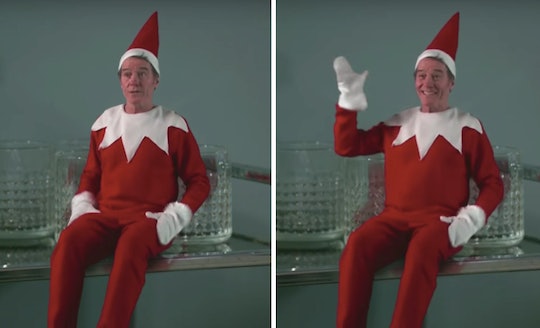 I like to think of the whole Elf on the Shelf Christmas tradition as one that unwraps itself in stages for parents. It's all cute at first, of course, but let's get real here; there's also something incredibly insidious about the thought of an elf watching you all the time. Judging you. Knowing your secrets. Sure, the kids think it's adorable, but for those of us parents who like a little glass of wine at the end of the day... your imagination can run wild. Which is why Bryan Cranston's creepy Elf on the Shelf might look so familiar to parents out there. Parents who have seen the dark side of Santa's little helper who likes to perch on shelves, ever watchful. Ever cherubic. Ever demonic, maybe?

The Breaking Bad actor was a guest on The Late Late Show with James Corden, and took part in a holiday skit about the wildly popular tradition of the Elf on the Shelf that has taken off like wildfire. In 2004, author Carol Aebersold and daughter Chanda Bell decided to share the story of their own family tradition of having a scout elf come down from the North Pole to watch over children and report back to Santa Claus about whether they were naughty or nice. Every night, parents are expected to find a new perch for the elf, where he presides over the goings-on in the household to make sure everyone is towing the line.

This year, it seems Cranston decided James Corden needed a very special Elf on the Shelf of his own.

Corden is found opening a gift sent to him by Cranston, and while he admits a "gift card would have been better," he finds he is begrudgingly grateful. The elf is modeled after Cranston, who says he is "quite the handsome fellow," and comes with a warning... er, message, saying:

Now this elf will report back to Santa whether you've been naughty or nice. So be nice, James! Your friend, Bryan Cranston.

Corden is nice, in the way regular people are nice. But he's also naughty-ish. And unfortunately, the Cranston elf is there to keep a close watch on his behavior. When Corden tries to take a cookie which was left out for guests, Cranston pops up as the elf (looking super creepy and smiley), saying:

Whatever you're doing, you ought to think twice, 'cause I'm taking notes if you're naughty or nice.

Cranston's elf is there to merrily catch Corden for every minor infraction, from breaking wind and not copping to it to telling a band member he was at a performance when he was a home watching repeats of Young Sheldon.

Eventually, things head into Chucky from Child's Play territory. A doll that has come to life and simply will not be defeated. Corden snaps and tries to put the elf in a blender, only to find the elf is impervious. It's basically every parent's nightmare about the Elf on the Shelf, I think. That happy, glass-eyed little imp judging you and waiting for you to slip up. OK, maybe not every parent's nightmare. But definitely mine.

I'm not the only one to feel a little creeped out by Cranston's elf, as one viewer on YouTube commented, "Someone please make that blender part into a Gif. I hate the Elf on the Shelf!﻿"

Another viewer shared his own terrifying experience with the Elf on the Shelf, "One time I had a elf on the shelf left it at my old house didnt [sic] pack it and it was in my new bedroom closet." ﻿

Here's the message I got from Cranston's version of Elf on the Shelf; that scout elf pretends to be there to watch the kids and make sure they aren't jamming things up their noses and such, but I'm not buying it. I think this elf is there to quite literally sit in judgment over the entire family. Sneaking back to Santa at night with his overly-detailed reports about little white lies, cookies, and canceled appointments. I personally hope Santa fires this particular scout elf, he seems like a real jerk.