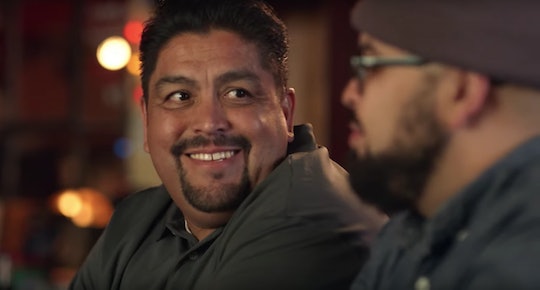 Being a stepparent is not for the faint of heart. As someone who has had a stepparent and married a man who became stepfather to my kids, I can tell you — it's fraught with a capital F. And despite the fact that stepfamilies are so incredibly common now, it's not like there's loads of information on how to do it well. It's like you get thrown into a situation with all of these complicated relationships and emotions without a single clue on what to do. So when someone does it well... they deserve recognition. In fact, Budweiser's commercial for dads who "stepped up" is a beautiful tribute to the difference a stepfather can make to a kid and why their role matters more than ever.

Ahead of Father's Day on Sunday, June 16, the beer company released an incredibly moving commercial in an effort to honor stepdads who really stepped up for their kids. The new commercial plays out like a mini documentary in just under four minutes, telling the story of three families.

Victor, Chloe, and Shealynn each talk about their experiences with their stepdads when they first came into their lives. How they made things a little difficult for them because they were experiencing a bunch of mixed emotions about welcoming a man into their lives.

As Chloe explained in the video, "I had this fantasy that my parents were going to get back together. When my mom met Randy, I just remember she would try to get us to act like father and daughter, I was not having it."

This is a pretty common issue for children of divorce, according to Psychology Today, and can really impede a stepparent's transition into their new role. But all of these stepdads were willing to take on the challenge for one reason: they loved these kids.

As Paul explained, "I just took things day by day, and we grew as a family."

They did manage to grow as a family... which is why each of these kids asked their stepdads to adopt them this Father's Day.

Of course, each man got emotional about the idea that, after years as a stepparent, they were finally leveling up, as it were. To become adopted parents.

And, yes, this is when everyone obviously starts collectively sobbing.

This commercial isn't just a touching tribute to three men who stepped up for their stepkids. It's a powerful reminder to all stepparents that they matter. According to The Stepfamily Foundation, more than 50 percent of children under the age of 13 are living with one biological parent and a stepparent. It's a complicated living situation that takes patience, communication, and perhaps above all, a wealth of empathy.

Budweiser wants to honor all fathers with a new promotion this Father's Day. Share your story about your dad with the hashtag #ThisBudsForYou and the beer company will donate $1 for each story to The Stepfamily Foundation, an organization dedicated to helping families navigate the emotional waters of blending.

So if you happen to be one of those stepdads who stepped up... Happy Father's Day. You've earned it in more ways than you realize.