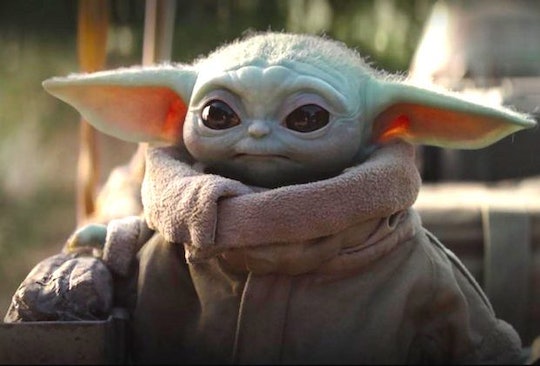 Look, Build-A-Bear has truly hit gold when it comes to creating cuddly versions of our favorite characters. The 'Christmas Vacation' Cousin Eddie Build-A-Bear really did it for me this past Christmas, but now they've truly outdone themselves with a Baby Yoda Build-A-Bear. Baby! Yoda! If there's anything cuter than Baby Yoda, I don't want to know because it might kill me dead.

A Business Insider article reported that soon we will be able to have our own Baby Yodas to add to our Build-A-Bear collections, and honestly this is just the best news. Romper has reached out to Build-A-Bear for more information, but has not heard back at time of publication. The popular retailer already has a ton of great Star Wars characters available to build, including the newest droids, but Baby Yoda? I see a lot of Mandalorian costumes coming this Halloween.

“The Child,” AKA Baby Yoda has been increasingly popular, no matter if you’ve seen the new show on Disney+ or not. I mean, how can you not love his adorable little face, his sweet sensitive eyes, and amazingly huge ears? And this is how popular this character is, y’all — Business Insider also reported that the Baby Yoda toy from Funko has “quickly become a top-selling action figure on Amazon in early December,” even though those who preordered won’t receive it until May.

Build-A-Bear CEO Sharon Price John said during a presentation at the ICR Conference in Orlando, “I'm excited to share we will be one of the first companies to provide the digital and internet phenomenon who is trending higher than all the presidential candidates combined,” Business Insider reported. And apparently, they started the partnership with Build-A-Bear to make this Baby Yoda bear right when the first episode aired, according to John.

And it makes sense, since Build-A-Bear is pretty well-known for creating iconic bears based on pop culture. But like, move over, kids. I'm stuffing my own Baby Yoda and nobody's allowed to touch him but me. Just keep your eyes peeled for the big announcement of when the Baby Yoda Build-A-Bear is going to hit the stores and/or online.

More Like This
Your Little Builder Can Now Have A Birthday Party At Lowe’s
The New Dad In Your Life Will Love These 20 Sweet Valentine's Day Gifts
This Is What New Moms Really Want This Valentine's Day
Are We All Stressed About Grocery Prices Right Now Or Is It Just Me?
What Parents Are Talking About — Delivered Straight To Your Inbox