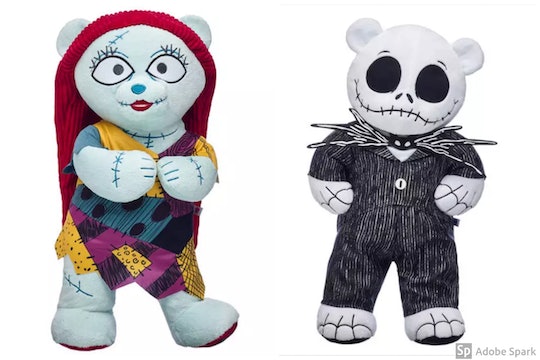 Everybody Scream! Build-A-Bear 'The Nightmare Before Christmas' Bears Are Here

With Halloween right around the corner, you are probably busy stocking up on spooky home decor, costumes, and giant bags of candy to pass out to the neighbor kids. But the most important Halloween prep of all is dropping everything and running to order Jack and Sally for your kiddos (or yourself) because Build-A-Bear has The Nightmare Before Christmas bears available online, and your Halloween celebration won't be complete without one.

As if you needed one more Halloween-themed item to freak out about, you can now build a Jack Skellington or Sally bear at Build-A-Bear because having characters from the best Halloween/Christmas crossover movie for your kids to snuggle up with is a peak holiday time parenting move. This is Halloween, indeed.

If you or your kids are fans of the Pumpkin King, the Jack Skellington Build-A-Bear is going to absolutely fill your heart with an abundance of creepy joy. The bear itself is skeleton white in color and looks innocent enough sporting Jack's signature stitched-on grin and blacked-out eyes. The bear paws appear to have a cobweb-like design on the hands, and the bottoms of the feet feature The Nightmare Before Christmas logo on one foot and Jack's actual face on the other.

What makes this character truly stand out is the pinstriped outfit you can add to the skeleton-themed bear, complete with bat bowtie. The two-piece suit set has a jagged edge on the bottom of the jacket to add to its ghoulish appeal.

Although Jack usually gets the majority of the attention when it comes to The Nightmare Before Christmas decor, toys, and apparel, Sally is the unsung hero of the movie, and in my humble opinion deserves every single speck of credit that Jack typically gets... and then some. Build-A-Bear apparently agrees with that sentiment because their Sally bear is nearly too cute for words.

From her red rag doll hair to the nostalgic stitching across her pale blue body, Build-A-Bear seriously nails Sally's details. Those eyelashes and her red-lipped grin are just precious. Sally's recognizable patchwork dress is the perfect accessory for the Sally Build-A-Bear, which also features the character's face, as well as the movie's logo, on the bottom of the bear's feet.

The piece de resistance of the entire collection is the ability to add a sound chip into either bear that sings a song from the movie. The chorus of the iconic "This Is Halloween" song for Jack and for Sally, "Sally's Song" will play with just the press of a paw when you include the sound chip in your bear. Just try and listen to either without grinning — it is nearly impossible. Now that I know these exist, I'm probably going to get them for myself, just so that I can play the songs over and over again whenever I need a little pick-me-up this fall and my PSL just isn't cutting it anymore.

Both of The Nightmare Before Christmas bears are available for purchase online now on the Build-A-Bear website. You can order each bear sans clothing and sound chip for $29 each, or purchase character bundles with clothing and sound chip for Sally for $53 and Jack for $55. Sally's dress is priced a couple of dollars less than Jack's suit, contributing to my point that Sally is the superior character, because she will save you a few bucks that you can spend on other fall-themed goodies. But no matter which character you choose, you're sure to have a fun Halloween season with either (or both!) of these iconic characters around.

More Like This
21 Mother's Day Gifts For Your Sister Who Deserves It All
20 Best Gifts For Stepmoms
19 Gifts College Grads Will Love & Actually Use
From Captions To Gifts, These Are All The Kindergarten Graduation Ideas You Need