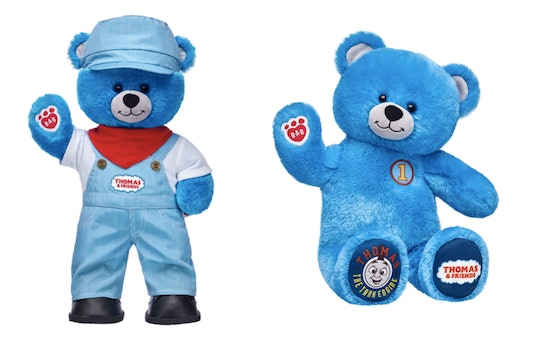 One of the worst fights among my sons was over a Build-A-Bear fiasco. I won't go into all the details because they'll give me PTSD, but let me tell you this: all kids are pretty darn passionate about their bears from Build-A-Bear. I think it has something to do with caring more for something you created with your own two hands. But there's also the clothes and accessories and the little heart and naming them... kids truly can't get enough. And that was before you brought Thomas & Friends into the mix. In fact, Build-A-Bear's new Thomas & Friends collection is probably going to be on your holiday shopping list, so you better get in the know.

I'm sure you're all well-versed in the Thomas & Friends universe. Thomas the Tank Engine, Percy the Small Engine, and their other engine friends who all work together on the island of Sodor. The show, which was based on The Railway Series by British author Reverand W. Awdry, has been gaining steam (yes, I did it) with kids since it first came on the screen in 1984. While kids love the series, of course, I have a feeling the toys have always been the real draw. Because let's face it; trains are pretty fun, and everyone looks good in those cute little striped conductor outfits.

Even blue bears you stuff yourself, apparently.

Of course the Thomas & Friends bear is adorable on its own, bright blue with the little logo on its paws and everything. But the real selling feature in my opinion are the outfits. This bear has outfit options; if he's working during the day on the tank engines, for example, he's got a really lovely conductor's outfit with possible matching hat and even some kicky black combat boots to keep his paws safe.

And when he needs to go to bed after a long day of work? He has the cutest sleeper any bear could ever want.

The new Thomas & Friends bear base sells for $25.50 in the United States in stores and online, but you're going to want to add a few things. Like clothes, for one. And a 5-in-one voice box that should entertain your kiddo for hours with delightful Thomas & Friends sayings from the show.

We all know these bears and their accessories are going to be a huge hit with kids, so I think it's probably a good idea to simply accept your fate and get into Build-A-Bear before everyone figures it out and the lines get really wild.