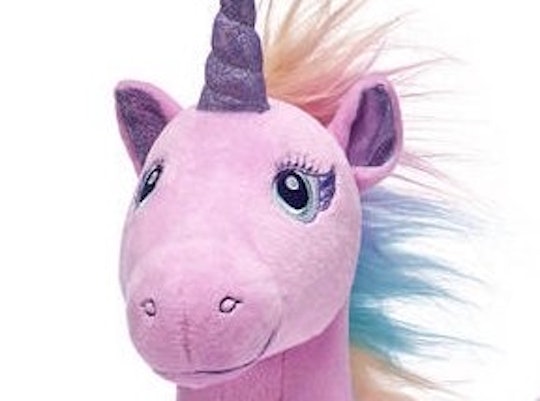 In case you haven't noticed, unicorns are having a major moment right now. Of course, to be fair, the mythological creatures have been pretty consistently popular for decades... but now they have their very own holiday, and it's almost here: National Unicorn Day is April 9, and you can celebrate with Build-A-Bear's new Pink Unicorn Fairy Friend (the latest addition to the Beary Fairy Friends collection). Actually, let me rephrase that: If you have a kid who's into unicorns on any level, you most likely *will* celebrate National Unicorn Day with Build-A-Bear's new unicorn plush pal. (Trust me, when your kid sees this thing, you won't have a choice.)

Basically a cotton candy-colored fantasy on four legs, this pretty pony would be perfectly magical to play with all by herself — but once you see the rest of the brand new "whimsical friends and accessories" being added to the Beary Fairy collection, she won't be alone for long. There are friends for her to hang with, light-up wands and dresses, fancy mini fairy-friend "wristies," and even a Fairy House, so your unicorn can live in serious style.

Pink Unicorn Fairy Friend
Build-A-Bear
With a shimmering purple horn, glittery hooves and a gorgeous rainbow mane, this unicorn is fancy even without any accessories (though there are plenty of those available!).
Butterfly Bunny Fairy Friend
Build-A-Bear
This cuddly bunny is more than just cute: Her floppy ears and sparkly fairy wings are the key to this fairy friend's magical abilities.
Fairy Friend House
Build-A-Bear
A garden cottage where your unicorn and her pals can play and sleep, this plush stuffed animal house also makes it easy to carry your stuffed friends around (cute for storage, too).
Fairy Fox Wristie
Build-A-Bear
This mini fox with sparkly fairy wings is ready for adventure, whether on its own or while attached to the paw of a "full-sized friend" (like your new unicorn, perhaps).

Accessories can be purchased separately (prices start at $3 for a fairy wand or headband), or you can spring for the gift set version of whichever plush you choose (these come with complete costumes).

It all depends on how deeply your kid wants to be immersed in the fantasy world of the Beary Fairy Friends. If you have a little one who's already well-acquainted with the Build-A-Bear experience, you're probably familiar with this enchanted universe; if not, here's what you need to know: Introduced in the spring of 2018, the collection is based on a storyline developed by Build-A-Bear "in which cuddly woodland characters hailing from 'Mystic Glade' must put a little heart into everything they do, discovering fun ways to be kind in order to earn their fairy wings" (according to a press release).

Naturally this unicorn would make an irresistible addition to any kid's stuffed animal collection solo, but the idea of creating this furry fairy realm in your own playroom is undeniably appealing. Either way, there are probably at least one or two Build-A-Bear characters waiting at home to welcome this new friend.