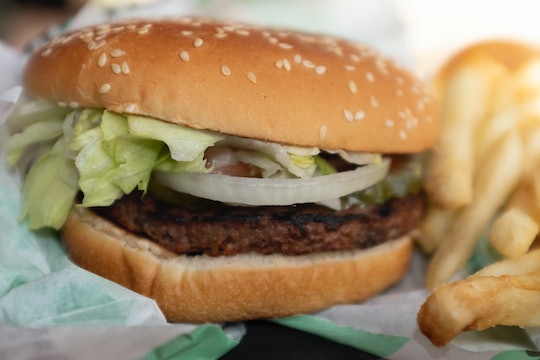 Starting today, if you can successfully solve a problem or answer a question, Burger King will give students a free Whopper for a limited time. While schools remain closed and many people are out of work, students who qualify can use their smarts to cash in on a free burger.

On April 13, Burger King announced it "wants to reward students who are continuing to study hard through the worldwide pandemic," with the new promotion, USA Today reported. How does it work? Starting today through April 20, Burger King will post a daily question — covering different subjects, including literature, math, chemistry, and biology — to its Facebook, Instagram, or Twitter account.

To participate, students must enter their answer on Burger King's app. Correct answers earn users a free Whopper with any purchase, with a limit of one per student. Promotion participants must be 18 or older. Younger students, between the ages of 13 to 18, can participate with parental consent.

The very first question for the promotion is a math problem, and for anyone who's a bit rusty in mathematics (*raises hand*) the equation will likely make you do a double-take. Thankfully, math-whiz Twitter users have already come to the rescue — with some even offering up lengthy explanations for the correct answer.

Many other restaurant chains are running special offers during this unprecedented time as well and this isn't the first time Burger King has offered a pandemic-inspired promotion in recent weeks. In mid-march, BK was offering two free kids' meals with any purchase for a limited time — around the same time states started shutting down schools indefinitely. "There's a tremendous impact on children, as a result of all the school closures," Jose Cil, CEO of Burger King's parent company Restaurant Brands International, told Business Insider last month. "It's one of the hardest hit groups of Americans, because they rely so significantly on school, for lunch."

As for the latest promotion, Marcelo Pascoa, Burger King’s head of brand and communications for North America, told AdWeek the free Whopper campaign is "a playful, light-hearted approach to a real life problem, something we could all use a little bit of right now."