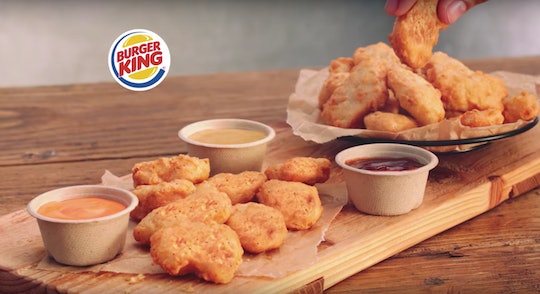 Those random fast food sales can end up being the holy grail for thrifty eaters with a mean craving, if you know where and when to look for them. Don't believe it? Take a quick look at your local fast food place's menus and see what ridiculously cheap deals they're serving up. Or you can take advantage of Burger King's 100 chicken nuggets for $10 deal, which is really a thrifty (and hungry) pregnant woman's dream come true, right?

Burger King seems to play around with their menu a lot and, as a customer, there's not really much complaining here. This is especially true when it comes to chicken products, where it seems Burger King really gets a chance to switch things up. Everyone remembers Burger King's on-again-off-again relationship with Chicken Fries, right? And that sweet moment when the fast food chain decided to add them as a permanent menu item in 2015, as reported by USA Today.

When it comes to getting value for your dollar, Burger King is certainly well known for that. In 2018, Thrillist ranked Burger King #5 out of 12 for best fast food value. Now, it seems that Burger King is really stepping up to the plate to offer deals that blow everyone else out of the water.

Starting this week, Burger King is offering a limited-time deal of a 10-piece Chicken Nugget for just $1. As noted by Business Insider and AOL, that deal is so good it even undercuts McDonald's on-again-off-again 20 nuggets for $5.

It's also noteworthy because Burger King's $1 menu is otherwise pretty limited. According to TODAY, a spokesperson confirmed that the only other deal offered at that price is a burger.

If a 10-piece chicken nugget order doesn't sound like it's enough, don't worry. Burger King has teamed up with Postmates to offer an even better deal.

As reported by People on Wednesday, order a 100-piece chicken nuggets for $10 plus free delivery with the code NUGGS. However, according to TODAY, the offer is only valid between Oct. 11 and Oct. 14.

So, if you want to take advantage of free delivery and an excessive amount of chicken nuggets (no one's judging), you'll have to act fast.

However, you'll want to pay attention the fine print; as People noted, Postmates' chicken nugget deal with Burger King is only available in restaurants that are located in Fort Lauderdale, Los Angeles, and Miami.

Sure, missing out on that sweet Postmates deal may be a bummer to everyone outside of those cities, but you can still take advantage of the general 10-piece Chicken Nuggets for $1 at your local burger king. And if you really need 100 nuggets now — pregnancy cravings are relentless, after all — you can simply order 10 of the $1 deal in the store.

It's unclear just how long Burger King's new $1 chicken nugget deal will last, so be ready to take advantage. Who knows, this deal could be the start of yet another one of Burger King's on-again-off-again relationships.